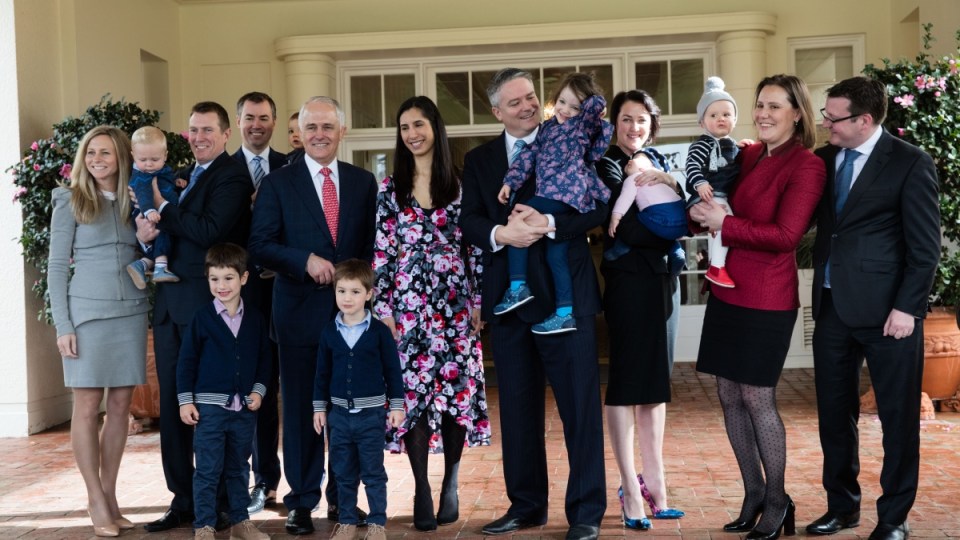 Lots of smiles but plenty of tension at the cabinet signing in. Photo: AAP

There was a definite air of bonhomie at Government House in Canberra for the swearing in of the second Turnbull ministry.

But behind the smiles, the handshakes and the hugs there is an uneasy tension.

The surest pointer to the insecurity at the heart of the government is the biggest cabinet in four decades.

Malcolm Turnbull wasn’t game enough to drop one of his Liberal colleagues to make way for the extra National as required under the Coalition agreement.

The lame excuse given by Finance Minister Mathias Cormann was that before the election Mr Turnbull promised that if returned he would keep his ministry intact. He was merely keeping a promise.

But that promise when it was made during the campaign was always in the context of pressure from hard-line conservatives Eric Abetz and Kevin Andrews to bring back Tony Abbott.

Everybody read it as code for keeping the dumped prime minister out in the cold.

To get a perspective on the unchanged and unwieldy cabinet you only have to go back to the precedent of Mr Abbott himself after his 2013 landslide win.

Despite that handsome victory, he was not game enough to radically reshape his frontbench lest he strengthen the hand of his then putative rival Mr Turnbull.

Labor’s Tanya Plibersek homed in on this vulnerability: “The make-up of his frontbench shows that he is worried that his colleagues are coming after him. He has to give jobs to enemies as well as friends. It is a time of great uncertainty and insecurity for the people of Australia when they see a PM with so little authority in his own party room.”

As the old political adage goes, the way to consolidate power and authority is to use it.

The most successful leaders of minority governments at the state level are the ones who act as if they had a comfortable majority.

Think Bracks in Victoria or Beattie in Queensland. Those premiers went on to majority victories at their next election.

The degree of difficulty is not to be underestimated. When you have a majority of one it only takes a rebel or a rogue in your ranks to wreck the stability of your government.

And as the independent Rob Oakeshott pointed out in the days of the Labor minority, any member of the house had the same power as him.

The only constraint is party loyalty and discipline.

Already the conservatives in the Liberal Party have served notice they will not brook any attempt by Mr Turnbull to tinker with the marriage equality plebiscite. It would only take three of them to bring down the government.

In light of these realities and simmering trigger points for chaos not even a Liberal win in the recount for the seat of Herbert would be buffer enough.

It is remarkable that a Prime Minister who has just won an election is in this precarious state. Especially as the Liberal party room was told on Monday that the greatest factor in the victory was the standing of Malcolm Turnbull with voters.

That and his undenied $2 million top-up of campaign finances at the eleventh hour.

The problem is his internal party critics aren’t convinced.

Tension under the smiles at cabinet swearing-in