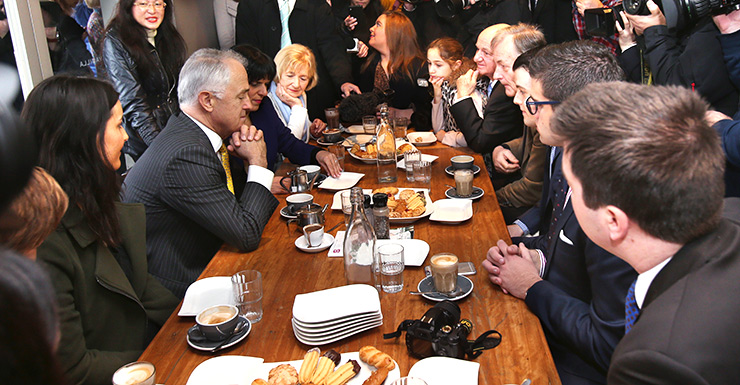 If you’ve ever had to handle the delicate task of arranging the dinner seating at a wedding reception, you might have an inkling of the challenge that faces the Prime Minister this weekend as he puts together the third Turnbull Ministry.

It’s not that long since Malcolm Turnbull announced his second ministry in February, following the resignations of three ministers (Jamie Briggs, Mal Brough and Stuart Robert) for various indiscretions, and the retirements of two (Andrew Robb and Warren Truss).

But just as a diplomatic way must be found to harmoniously accommodate two family groupings plus a disparate collection of friends at a wedding, the PM must produce a ministry that not only accommodates the ambitions of Liberal and Nationals MPs, but also makes an effort to placate the conservatives while balancing the representation of each state and territory as well as the two chambers of the parliament.

The overall number of ministers is fixed at 30, and can only be changed by legislation, while the proportion of that number allocated to the inner and outer ministries is at the prime minister’s discretion. With his second ministry, Mr Turnbull expanded the inner ministry – also known as the cabinet – from 19 to 21. This is one or two more than Tony Abbott‘s and Julia Gillard’s cabinets but the same as Rudd’s first one.

At the time, Mr Turnbull appeared to increase the number to accommodate Fiona Nash, the NSW senator who had just been elected deputy leader of the Nationals when Barnaby Joyce was promoted from deputy to leader.

Traditionally the leader and deputy leader of the Nationals hold positions in the coalition’s cabinet. In the wake of the election, the PM must replace at least two junior ministers (Wyatt Roy and Peter Hendy), and possibly a third (Richard Colbeck). Given the Nationals’ strong performance at the election, Mr Turnbull has committed to giving the junior party two more seats in the ministry.

At the time of writing, the PM had not indicated whether this means the proportion of Liberals and Nationals in the cabinet will be changed. Mr Turnbull could promote a Nat from the lower ministry to the Cabinet, such as Matt Canavan, the current Minister for Northern Australia.

However, Senator Canavan has only been a minister since February, let alone experienced enough to take on a senior government role. The two other Nationals in the outer ministry are even less credentialed. Expanding the cabinet in such a way would also make a joke of the considerably reduced outer ministry, which is meant to be a training ground for potential cabinet ministers but would have limited capacity to perform this role if it is reduced to only eight positions.

If the Nats are prepared to forego an additional seat at the big table, then it would be relatively easy to move two of their up-and-coming MPs into the vacancies created by the departures of Wyatt Roy and Peter Hendy.

Fortuitously, such a move would also maintain the ministry’s balance between the states and territories. The National parliamentary secretary to the Deputy Prime Minister, Keith Pitt, is from Queensland and so could fill the Qld-shaped hole left by Wyatt Roy.

Similarly, the Nats’ parliamentary secretary for Defence, Michael McCormick, hails from NSW, as did the recently departed Peter Hendy. All four men are also from the lower house, meaning the shift to Messrs Pitt and McCormack would not change the proportion of ministers from each chamber. This rather neat solution does have one small drawback, however. It does nothing to address the so-called need for Mr Turnbull to make a “conciliatory” gesture to the Abbott camp by returning their man to the frontbench or at least promoting a few of their own into the ministry.

The Prime Minister has made it clear he will not invite Mr Abbott back into Cabinet, despite gossip-mongers suggesting Health Minister Sussan Ley should be replaced. Tony Abbott may have been a good health minister under John Howard but is not the politician to deal with Labor’s ongoing scare campaign about Medicare.

And while the Abbott-supporters Michael Sukkar, from Victoria, and Zed Seselja from the ACT, might have good ministerial prospects, promoting them would make it harder for the PM to find the two extra spots promised to the Nats, while also throwing out the balance between the states and territories within the overall ministry.

Nobody should ever underestimate the short-term acrimony and long-term resentment that can arise from getting the dinner seating wrong at a wedding reception.

However, even more fury could be unleashed on Malcolm Turnbull if he makes a mistake with the ministerial reshuffle this weekend.