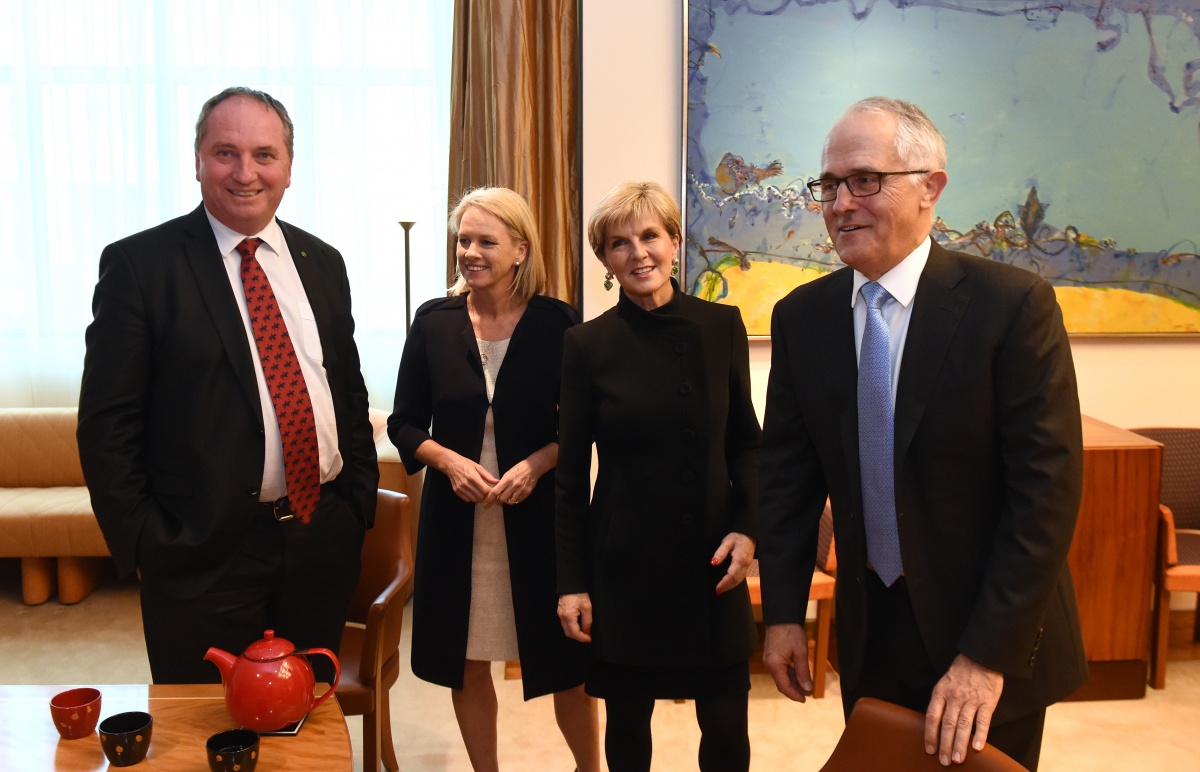 Barnaby Joyce is frustrated with attacks on the National Party. Photo: AAP

Prime Minister Malcolm Turnbull has claimed a mandate to govern Australia but his majority government is dependant on the Liberals’ confidential Coalition agreement with a resurgent National Party.

In the meantime, Labor’s Bill Shorten, with an extra 14 seats in the House of Representatives, has indicated he will be in continuous campaign mode from now on.

“Well I know that Mr Shorten’s attempt at a victory lap might have misled you, but we have actually won the election,” Mr Turnbull said Wednesday. “That’s the mandate. We’ve won the election. We have a majority in the House of Representatives.”

Mr Turnbull conceded that with its extra numbers, the Nationals were entitled to extra cabinet positions under the Coalition agreement now being hammered out.

The explicit contents of the Coalition agreement has become an issue with Nationals’ leader Barnaby Joyce insisting on confidentiality.

“As my esteemed predecessor and mentor John Howard said, politics is governed by the iron laws of arithmetic,” Mr Turnbull explained.

He is expected to announce his next ministry after party meetings on Monday.

Observers will then be able to gauge the strength of the Nationals’ influence over Turnbull government policy on economics, trade, the environment and social policy on the basis of portfolio allocation.

Mr Turnbull declined to reveal the details of the formal, but secret, briefing he has received from Treasury and the Department of Prime Minister and Cabinet.

But he indicated Australia’s revenue projections in the face of global uncertainty following the UK decision to leave the European Union remained on track with the May 3 budget.

“All of our election commitments will be delivered. That’s our commitment. Where they need to be legislated we’ll obviously require the support of the Senate.”

And with an incoming Senate now comprising a diverse crossbench, including Nick Xenophon, Pauline Hanson, Derryn Hinch, and the Greens, the “iron laws of arithmetic” become crucial … one bill or resolution at a time.

While Mr Turnbull and Mr Joyce forge a new executive government for the 45th parliament, Mr Shorten is preparing to go back to campaigning.

He will schedule town hall meetings and community forums over the next three years, a tactic which appear to have given him the grass roots engagement advantage which assisted Labor’s 2016 electoral gains.

Mr Shorten has also attacked the secrecy of the Coalition agreement.

“I have not heard a single sensible reason for keeping the Coalition deal a secret. This is not internal party business. It is national business and the nation deserves to know what deals are being done,” Mr Shorten said.

With his leadership unopposed after the election defeat he is expected to reconfirm Tanya Plibersek as shadow foreign minister following suggestions she should resume the health portfolio.

Foreign Minister Julie Bishop has indicated she also wants to continue in that role in the Turnbull ministry.

After the new Turnbull ministry is sworn in next week and a date set for the resumption of parliament, unpleasant issues that emerged during the election campaign are expected to return to national prominence.

Parliamentary questions and calls for an Auditor General inquiry into the Liberal Party’s constituent data mining company Parakeelia are certain.

It has been alleged that Liberal MPs’ taxpayer-funded electorate allowances have been used to fund Parakeelia’s research operations while the company has also made contributions directly to party coffers.

The sensational AFP raids on Labor staffers after a security breach complaint from NBN Co. is expected to be considered by the parliamentary privileges committee.

The Opposition claimed parliamentary privilege covered documents it had received from its informants.

Following the guilty verdict delivered by a Sydney jury against former Labor Party powerbroker Eddie Obeid, Mr Shorten committed to the resumption of a parliamentary inquiry into the need for a federal anti-corruption body.

Corruption will be in the spotlight again soon when NSW ICAC reports on allegations of Liberal Party washing of prohibited donations from NSW property developers and an Obeid related water privatisation scheme.

Nationals in line for a bigger say in Coalition