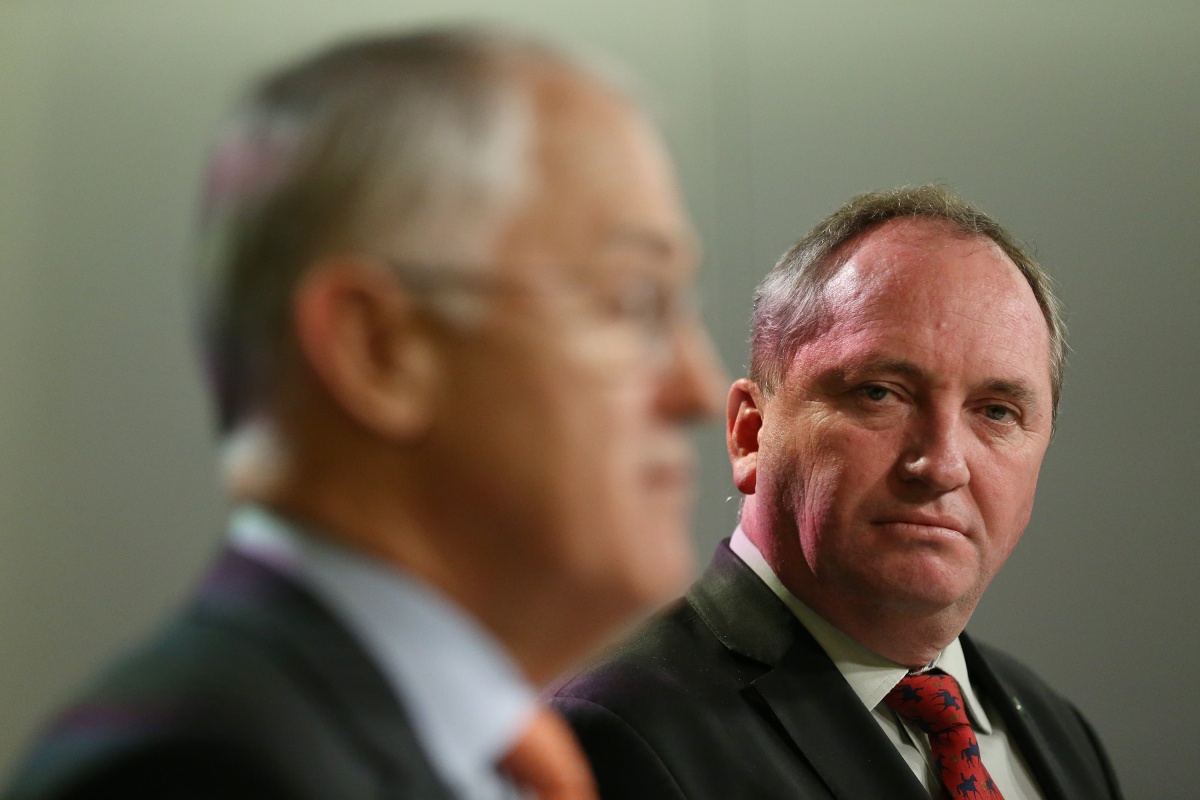 Why does Nationals’ leader Barnaby Joyce want his party’s Coalition agreement with the Liberals kept secret?

Mr Joyce, freshly re-elected in his seat of New England, and bringing an extra Nationals MP to strengthen numbers to offset significant Liberal losses, has made an issue of confidentiality.

While it was confirmed on Monday that the Coalition will form a 76-member majority government, the Nationals, with 22 of those 76 MPs (now including Flynn and Capricornia), has considerable negotiating leverage.

Before the Nationals meet in Canberra on Tuesday to prepare for the Coalition agreement negotiations, Mr Joyce told the media that confidentiality was “aspiration number one, two, three, four, five and six”.

Opposition Leader Bill Shorten pounced on Mr Joyce’s remarks and denounced the lack of transparency, even though it emerged that traditionally any Coalition agreement has not been a public document.

“Why is it secret? Why can’t the Australian people know what’s going on?” Mr Shorten said.

Mr Joyce insists there is nothing “clandestine, sinister or remarkable” about the Coalition agreement. It was a matter of proportionality with Nationals Cabinet ministers aligned to the number of MPs and senators.

He said the Nationals would be seeking Cabinet portfolios that help the party’s regional and rural constituents.

But sceptics point to recent changes to switch portfolio responsibility for water from environment to agriculture controlled by the Nationals (Mr Joyce) as a motivating example.

Also up for grabs may be the resumption of control of trade, operated by the Liberals in the last parliament.

Shadow Treasurer Chris Bowen told the ABC’s AM program the Coalition agreement should be made public, particularly after Malcolm Turnbull had been forced to prohibit a conscience vote on same-sex marriage at the insistence of the Nationals when he replaced Tony Abbott as prime minister last September.

“We saw Malcolm Turnbull sell out good economic policy to the Nationals when he became Prime Minister by agreeing to an anti-business effects test, which is very poor policy indeed,” Mr Bowen said.

Immediately after bedding down the next Coalition agreement, Prime Minister Turnbull faces a long list of political and budgetary problems.

He has to reshuffle his Cabinet to replace defeated MPs Peter Hendy, Richard Colbeck and Wyatt Roy. He has to stabilise the health portfolio by possibly moving Health Minister Sussan Ley. This is considered necessary to reassure Australians that the Coalition has no hostile intentions towards Medicare.

He has to accommodate alienated Liberal Party hardliner Peter Dutton. He must now, or at some future time, decide if he will restore former PM Tony Abbott to Cabinet to reward his team discipline during the campaign.

There is the implied six-month deadline from ratings agency Standard & Poor’s, and now Moody’s, to repair the budget or risk Australia’s beneficial AAA credit rating.

This will require either a mini budget before Christmas or a national summit of all economic and social stakeholders to reach a “fairness” consensus to secure budget repair.

In this regard the government will have to decide to delay or amend its commitment to lower company tax to 25 per cent over 10 years, said to be at a cost of $50 billion when fully implemented.

Mr Turnbull must present to parliament the double dissolution “triggers”, the Building and Construction Commission and registered organisations bills to a joint sitting if necessary.

The Coalition’s superannuation reforms, claimed to be effectively retrospective in the accumulation phase, will have to be “tweaked” because of blow back from the financial services sector and the Liberal backbench.

Mr Turnbull must introduce, as promised, enabling legislation to take Australians to a plebiscite on same-sex marriage. If the bill does not pass the House of Representatives (some Liberals may cross the floor) or the Senate, Mr Turnbull will have to take the matter back to the party room to see if agreement can be reached for a conscience vote of MPs to simply amend the Marriage Act.

Also on the problem list is the plan to partially deregulate university fees plus much-needed reform to the haemorrhaging VET vocational education and training taxpayer funded FEE-HELP scheme.

There are plenty of problems to solve, now made a little easier by a government with a sliver majority.

Nothing to hide in ‘secret’ Coalition deal: Nationals