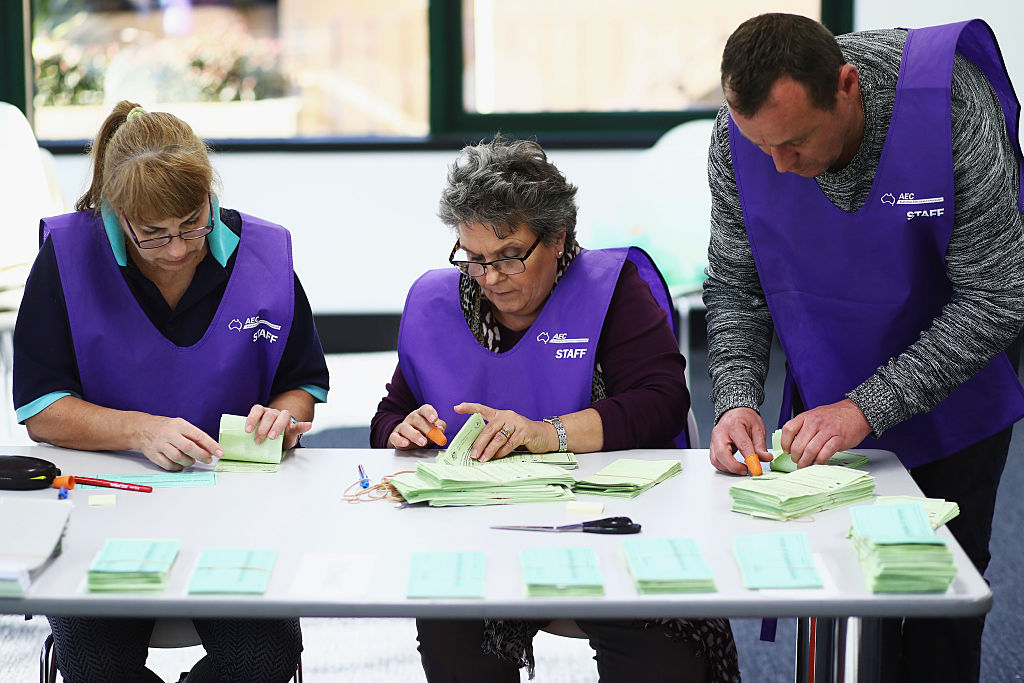 Malcolm Turnbull is edging closer to majority government after Coalition candidates continued to claim the lion’s share of postal votes in the nation’s most marginal seats.

In counting on Wednesday, the Liberal Party overtook Labor in the race for the hyper-marginal Queensland seat of Forde and is poised to take the lead in the two-candidate count for the South Australian seat of Hindmarsh.

In Forde, the LNP member Bert van Manen now leads Labor’s Des Hardman by 268 votes after the counting of 72 per cent of ballot papers.

At the close of counting on Wednesday night the Coalition was ahead in 74 lower house seats – two short of what it needs to govern in its own right.

Here’s the latest breakdown of the seats expected to be held by each party:

The key seats to watch

The Coalition’s best opportunities for securing a majority probably rest on winning at least two of four most marginal seats where Labor is in the lead.

They are Hindmarsh in South Australia, Capricornia and Herbert in Queensland and Cowan in WA.

Coalition candidates reduced Labor’s margins in each of these seats after counting on Wednesday.

The government looks well placed to pick up Hindmarsh, despite the high profile of Labor’s Steve Georganas who held the seat before the 2013 election.

On Monday Mr Georganas led the Liberal’s Matt Williams by 639 votes but since postal counting began on Tuesday his advantage has reduced to 150 votes.

The AEC estimates that as many as 22,000 votes are yet to be counted.

Mr Williams has won more than 54 per cent of the 5000 postal votes counted so far.

More seats in play for the Coalition

Coalition candidates are winning up to 70 per cent of postal ballots and this is creating tighter contests in many of the seats where Labor candidates are ahead.

This trend has revived the Coalition’s hopes of retaining the seat of Flynn in Queensland that was written off after the counting of booth votes on Saturday.

Even though Mr O’Dowd trails Mr Beers by 1824 votes he is reeling in more than 65 per cent of the postal vote.

There is a strong chance the trend will continue and this probably means a result will not be known for at least another week.

At the 2013 federal election Mr O’Dowd won 69 per cent of the postal vote and more than 57 per cent of pre-poll and absentee votes.

The record number of pre-poll and postal votes cast at this year’s election has contributed to counting delays.

The Australian Electoral Commission has also amended its procedures to avoid repeating errors made at the 2013 federal election when 1370 ballot papers were lost in counting for the WA senate.

Amid rising public concern over the time taken by the AEC to tally votes after Saturday’s election, Australian Electoral Commissioner Tom Rogers defended his organisation’s handling of the count.

“Anyone who has an issue with the Electoral Act is absolutely able to raise it with the Australian Parliament, and I suggest this would be more productive than criticising the hard work of the many thousands of ordinary Australians who are delivering the election,” he said in a statement.

“Proper process should be followed – speeding up the delivery of the final result at the expense of due process could undermine the public’s confidence in that very result.”