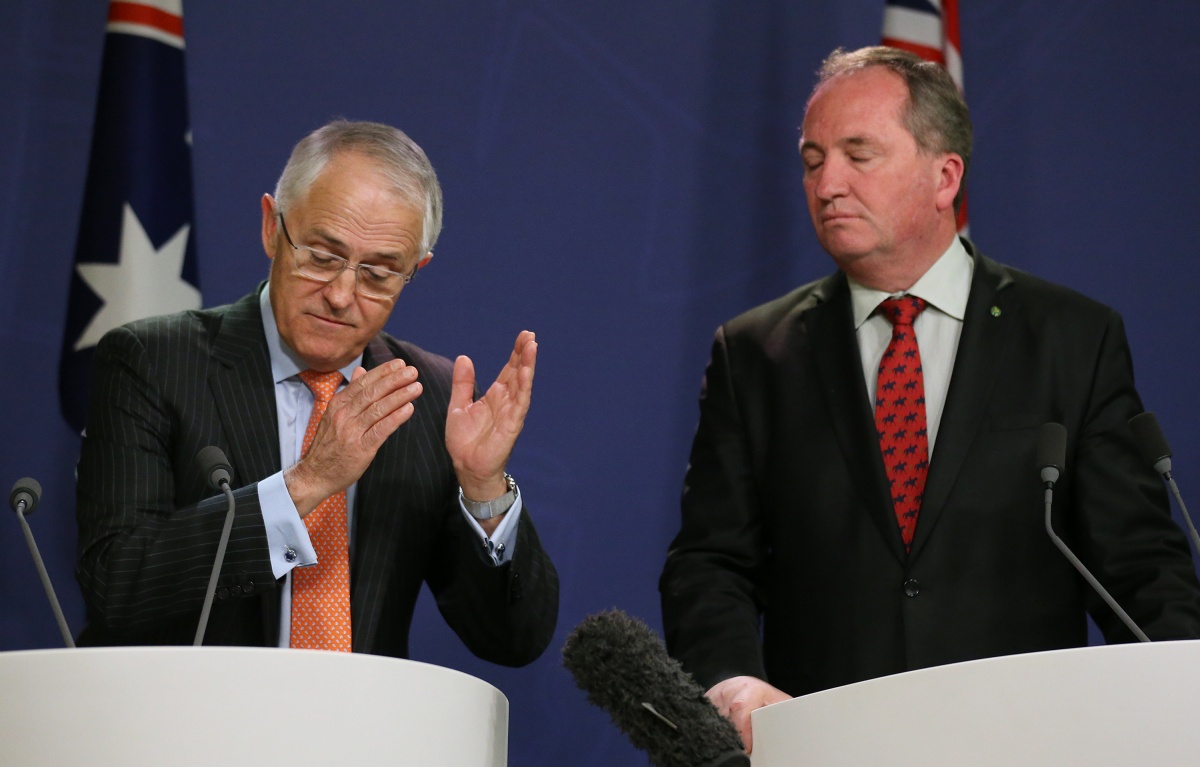 Three days after his angry, resentful response to the electorate’s rejection of the Coalition’s manifesto, caretaker Prime Minister Malcolm Turnbull is now contrite.

At a Tuesday news conference at the Commonwealth government offices in Sydney, Mr Turnbull, flanked by Deputy Prime Minister and Nationals’ leader, Barnaby Joyce, acknowledged that the electorate was disillusioned with and distrustful of the major political parties.

“I take full responsibility for the campaign,” he said. “The Australian people have voted and we respect their verdict.”

Mr Turnbull again blamed a Labor “lie” that the Coalition would privatise Medicare for the Coalition’s reverses at the ballot box.

But he said deep reflection and hard work would be required to win back trust in the Coalition which obviously had been lost.

“There was some fertile ground in which that grotesque lie was sown,” Mr Turnbull said — an obvious reference to his predecessor Tony Abbott’s now infamous 2013 promise of “no cuts to pensions, no cuts to health, no cuts to education”.

Mr Turnbull is waiting to establish that the Coalition has 76 seats so he can formally advise Governor-General Peter Cosgrove to again commission him to form the next government.

Standing by to negotiate with the cross bench

There is no constitutional requirement on Mr Cosgrove to receive certification of a government majority, but by convention he has the discretion to commission a prime minister on the understanding the Parliament always has the power to determine confidence in this person and the government on the floor of the House of Representatives.

At 8pm Tuesday, the Coalition’s firm seat count was listed by the ABC psephologist Antony Green at 70 – up two: the South Australian seat of Grey, where the Liberal Party had taken an unassailable lead over a Nick Xenophon Team candidate, and Petrie in Queensland.

With the remaining eight seats still in doubt – three trending to the Liberal Party and five to Bill Shorten’s Labor, Australia appears headed for a hung parliament.

The three doubtfuls where the Liberals are ahead are: Chisholm, Gilmore, and Dunkley. Labor is ahead in Forde, Hindmarsh, Herbert, Capricornia and Cowan.

If the current count trend in the eight doubtful seats prevails to the end of the count, the Coalition would emerge with 73 seats to Labor’s 72 : a hung parliament.

With the Coalition holding the most seats in this scenario, Mr Turnbull would have some numerical advantage in any minority government negotiation with five cross benchers: Kathy McGowan (Indi), Rebekha Sharkie (Mayo), Bob Katter (Kennedy), Andrew Wilkie (Denison) and Adam Bandt of the Greens in Melbourne.

While Mr Turnbull has said he is “quietly confident” of reaching majority government, the final count must favour the Liberal Party in at least three of the seats currently trending to Labor.

Speaking in Queensland on Tuesday, where he was thanking the electorates that returned Labor candidates, Mr Shorten said: “There is a very real chance that Malcolm Turnbull is considering calling a snap election to sort out his own problems within his own party.”

Mr Shorten offered no evidence to back up this contention which, to political observers, appeared to be a rhetorical over reach, adding unnecessarily to the electorate’s uncertainty about the election result.