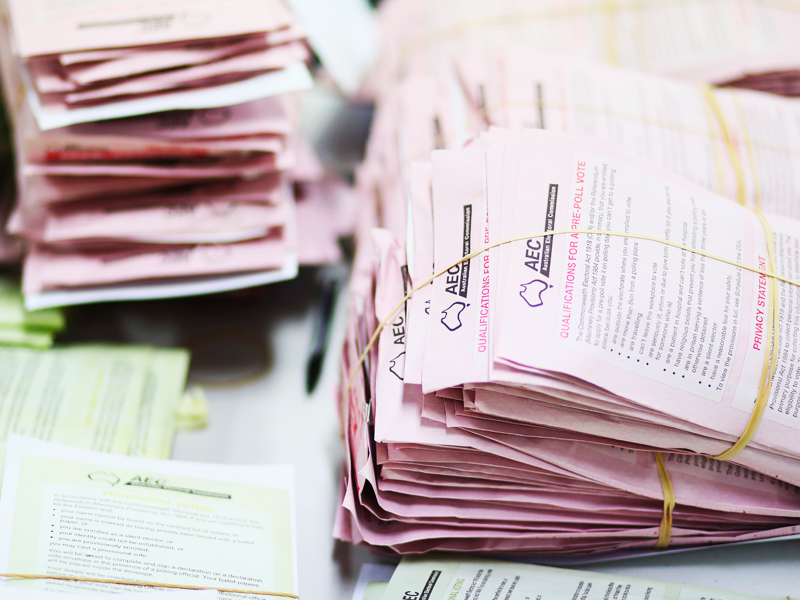 The AEC has completed counting in all but three of the seats in the 2019 federal election. Photo: Getty

Postal voters are boosting Malcolm Turnbull’s prospects of retaining control of the country, according to the latest counts for cliff-hanger seats in the federal election.

The Australian Electoral Commission began counting more than 1 million postal votes on Tuesday, a process that is likely to take several weeks to complete.

But the early counts reveal a universal voting pattern across the most marginal electorates that show coalition candidates winning more than half of the postal votes.

The Coalition has overtaken the Nick Xenophon Team candidate in the South Australian seat of Grey after the AEC began a recount of the preference vote.

The strong support for Liberal candidates from postal voters means that the party has halved Labor’s lead in the critical South Australian seat of Hindmarsh where the ALP candidate Steve Georganas is netting only 46 per cent of the two-party preferred postal vote.

Postal voters are also extending the leads of Liberal candidates in other key marginal contests such as Petrie in Queensland, which now appears out of reach for Labor.

The trend in postal voting for the government is so strong that it might even revive the prospects of sitting Coalition MPs such as Wyatt Roy in the Queensland seat of Longman who were thought to be out of contention on Monday.

According to disclosures posted on the AEC website on Tuesday night, the Coalition was leading in 73 lower house contests to Labor’s 72, while minor parties and independents were ahead in five seats.

Mr Turnbull and the Coalition parties need 76 seats to retain government in their own right.

The latest counting is likely to muzzle dissident Coalition backbenchers who have savaged the Prime Minister’s performance as leader since the election was held on Saturday.

Leading Turnbull supporters led by Attorney General George Brandis have called on disgruntled conservative Liberal Party MPs to curtail their public attacks on the Prime Minister, warning they could jeopardise the Coalition’s chances of retaining power.

Even though the early trend in postal voting is encouraging for the government, outspoken backbenchers such as South Australian senator Cory Bernardi will have to be patient because the AEC counting in some marginal seats is proceeding very slowly.

In the case of several marginal seats the commission has not even completed the counting of booth votes from Saturday’s poll.

In the tightly fought Queensland seat of Capricornia, where Labor currently leads by only 994 votes, the commission has not yet tallied the aggregate two party preference vote for the leading candidates in five booths.

Coalition may be inching to majority

The flow of postal vote results began to trickle through to the AEC website after 9pm on Tuesday and although less than 1 per cent have been counted, the trend in favour of the Coalition is most evident.

Here is a wrap of how the postal counting is affecting contests in some of the key marginal seats:

Labor candidate Steve Georganas had a lead of 639 votes when the booth votes were counted on Saturday night.

His lead was cut to 347 after Liberal sitting member Matt Williams scooped 53 per cent of the 4000 postal votes counted on Tuesday.
As many as 23,000 postal votes remain to be counted.

The ALP will be severely tested trying to pick up this seat after LNP incumbent Luke Howarth increased his lead to 1695 votes.

Mr Howarth is winning more than 56 per cent of the postal vote.
There are still up to 27,000 votes to be counted.

Postal votes in this Melbourne metro seat are breaking to the Liberal candidate Julia Banks by more than 57 per cent.

On Monday night Ms Banks led by only 66 votes, but at the end of Tuesday she was ahead by 362.

Sitting member Ewen Jones is trailing by 694 votes with as many as 24,000 postal votes still to be counted.

Mr Jones may still win the seat because he is garnering 58 per cent of the postal vote.

Turnbull acolyte Wyatt Roy still has a remote chance of retaining his seat.

With up to 25,000 votes still to be counted Mr Roy is winning more than 58 per cent of the postal vote.

The AEC is yet to announce the results of postal counting for the marginal seats of Cowan (WA), Capricornia (QLD), Gilmore (NSW), Dunkley (VIC) and Forde (QLD).

Postal votes revive the Coalition’s chances of a win