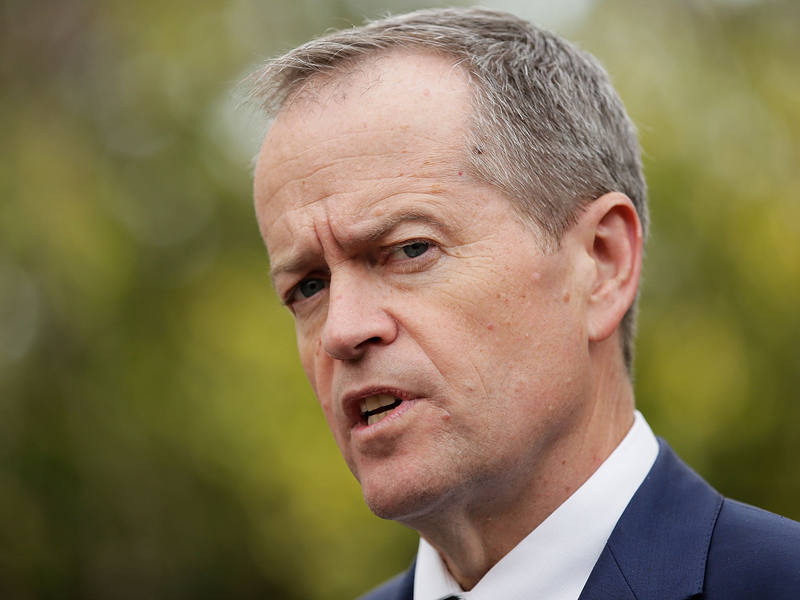 Bill Shorten was confronted by an Anglican priest over his same-sex marriage comments on Tuesday. Photo: Getty

Bill Shorten has seized on the momentum of an unexpectedly big swing to Labor by staying on the campaign trail and hammering his now “weak” opponent.

Whereas the caretaker Prime Minister Malcolm Turnbull was holed up in his Canberra office on Monday, the Labor leader toured electorates and called a media conference to demand his rival’s resignation.

He twisted the knife in deeper during yet another doorstop in Brisbane on Tuesday.

“He’s got a backbench in the revolt, he’s got a push to have Tony Abbott back in cabinet, this is a divided government led by a weak Prime Minister so I’ve got no doubt the easy option for him would be to pull the rip cord and look at having another election,” Mr Shorten told reporters.

The Labor leader, who admitted to the ABC before the poll that he enjoyed campaigning, took the chance to warn voters of a — surely unpopular — second election.

“There is a very real chance that Malcolm Turnbull is considering calling a snap election in the mistaken belief that this will sort out his own problems.

“Mr Turnbull may be tempted to say this is all too hard and he will go to an early election and put himself first but not the nation.”

Mr Shorten’s almost triumphant tone was markedly different to that of the Prime Minister, who sounded chastened when he finally fronted the media on Tuesday, after more than a day of silence.

Mr Turnbull said during a media conference that he took “full responsibility” for the result — as if it were a defeat.

“The Australian people have voted and we respect the result.”

Mr Turnbull also shifted his rhetoric on Labor’s “Mediscare” campaign to admit its obvious effectiveness: “What we have to recognise is many Australians were troubled by it, believed it or at least had anxieties raised with it.”

Theoretically, it should be Mr Shorten’s job that is in greater jeopardy. He is widely expected to fail to form government — which means, under rules imposed by Kevin Rudd in 2013, the party leadership is automatically spilled.

But, whether as a consequence of Mr Shorten’s relentless attacks or because of an actual internal threat, it is Mr Turnbull who appears wounded and in the gravest danger.

“You don’t get that sort of election result that we’ve just had, I think, and then face a leadership challenge,” he told ABC radio on Tuesday.

“The only problem that Bill Shorten’s going to have when he walks into the next room of Labor supporters is getting the applause to die down so he can actually speak,” he told Sky News.

“It’s like landing [NASA spacecraft] Juno on Jupiter, what he’s managed to pull off over the last three years.”