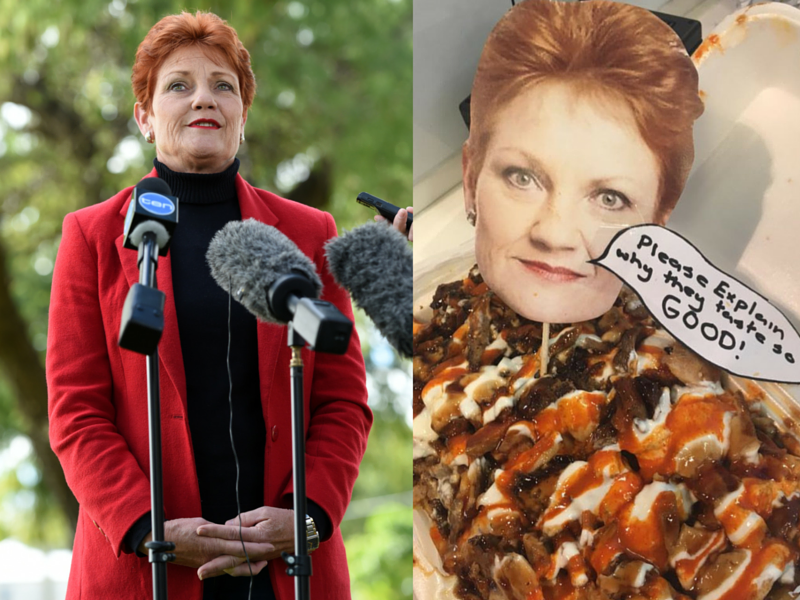 Members of one of Australia’s most popular pro-halal Facebook groups – the Halal Snack Pack Appreciation Society – are launching an attack on Queensland senator-elect Pauline Hanson.

Ms Hanson, 62, is Australia’s most high profile anti-Muslim and anti-halal voice, and her re-election to Parliament in Saturday’s election brought her views back into public focus.

The reaction has been so strong that a crowdfunding page has been started to purchase Ms Hanson’s former fish and chip shop in Ipswich, Queensland and turn it into a halal eatery.

• Q&A: Labor, Liberal MPs gang up on Greens
• HSP: the fast-food that started a revolution
• Did Sam and Kochie help get Hanson elected?

The One Nation leader drew the ire of the HSPAS earlier this week when video emerged of her rejecting Labor senator Sam Dastyari’s offer to share a halal snack pack.

This heated exchange prompted one HSPAS member to create the GoFundMe campaign to buy Ms Hanson’s former takeaway, which is now ironically owned by Vietnamese migrants.

“To make a point to the new Senator-elect from Queensland, Pauline Hanson, the purpose of this GoFundMe is to purchase Pauline Hanson’s old fish and chip shop and turn it into either a Kebab Shop or a Pop-Up Halal Snack-Pack store,” the campaign page wrote.

It followed a torrent of memes (see below) posted to the HSPAS attacking Ms Hanson for her anti-halal views.

The HSPAS was founded in December 2015 to celebrate the fast-food item known as the halal snack pack.

The group honouring the calorie laden late-night concoction has attracted a cult following of more than 150,000 members.

HSPAS members advocate a pro-halal and pro-Muslim agenda, as well as dedicating the group to reviewing the delicacy.

Another HSPAS devotee began a Change.org petition to get Ms Hanson to eat a halal snack pack. By Tuesday night it had secured 2,138 signatures out of its 2,500 target.

“As Pauline has been elected to parliament, we would like her to come to Sydney and share a HSP with Sam Dastyari,” the campaign wrote.

“We would also like Pauline Hanson to produce facts to support her unpopular statistic. #wearetheother2percent.”

The statistic referred to her claim that 98 per cent of Australians do not want halal certification.

In May, one of the HSPAS founders told The New Daily the group had become a place to speak up against anti-Muslim and anti-halal voices.

“Those bigotry pages have been around for ages and there hasn’t been much to counter it.

“I guess this [HSPAS] has done a good job of unintentionally doing that.”

The HSPAS did not miss Ms Hanson’s slap down of the halal snack pack. Hundreds of members ridiculed her following Saturday’s comments: