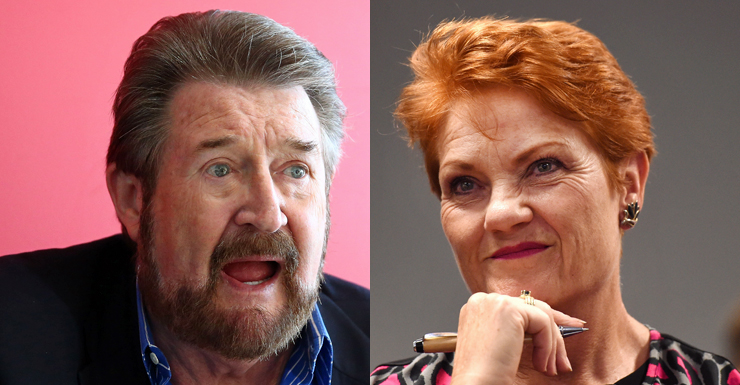 Both have secured enough votes to enter the Upper House, and one of the key planks of Ms Hanson’s election platform was a royal commission into Islam.

“She is very pleasant and what comes out of her mouth is not that pleasant,” Mr Hinch told ABC News Breakfast on Tuesday.

• Did Kochie help elect Hanson?
• Credlin unloads on Libs
• ‘AEC has it wrong’

He went on to say he was “not looking forward” to working with Ms Hanson in the Senate.

“We have very little in common.”

He continued: “She is talking about having CCTV cameras in mosques, and people go, ‘Well, why don’t you put it in churches to keep an eye on the paedophile priests?’

Derryn @HumanHeadline Hinch says he is “not looking forward” to working with Pauline Hanson in the Senate #ausvotes https://t.co/V5xCNIV1de

Mr Hinch, who openly admits he has never voted before, is now fielding calls from Prime Minister Malcolm Turnbull and Opposition Leader Bill Shorten as they jockey for support while the final outcome of the election remains unclear.

He is also prepared to fight any efforts by the major parties to limit his time in the Upper House to three years.

Half of the Senate will be elected for the longer six-year term, the rest will face voters again in three years.

“At the moment, the Justice Party is running behind Libs and behind Labor and with just over half of the votes of the Greens,” he said.

“I should be the one that stays for six years.”

Mr Hinch’s policies include a public register of convicted sex offenders, a Senate inquiry into the Family Court, an end to live animal exports and euthanasia laws.

“If I have to start this awful thing of horse-trading and it’s something I don’t believe in, I will not go to Canberra,” he said.

“I will not bend strongly on issues I feel strongly about and trade off on something.”