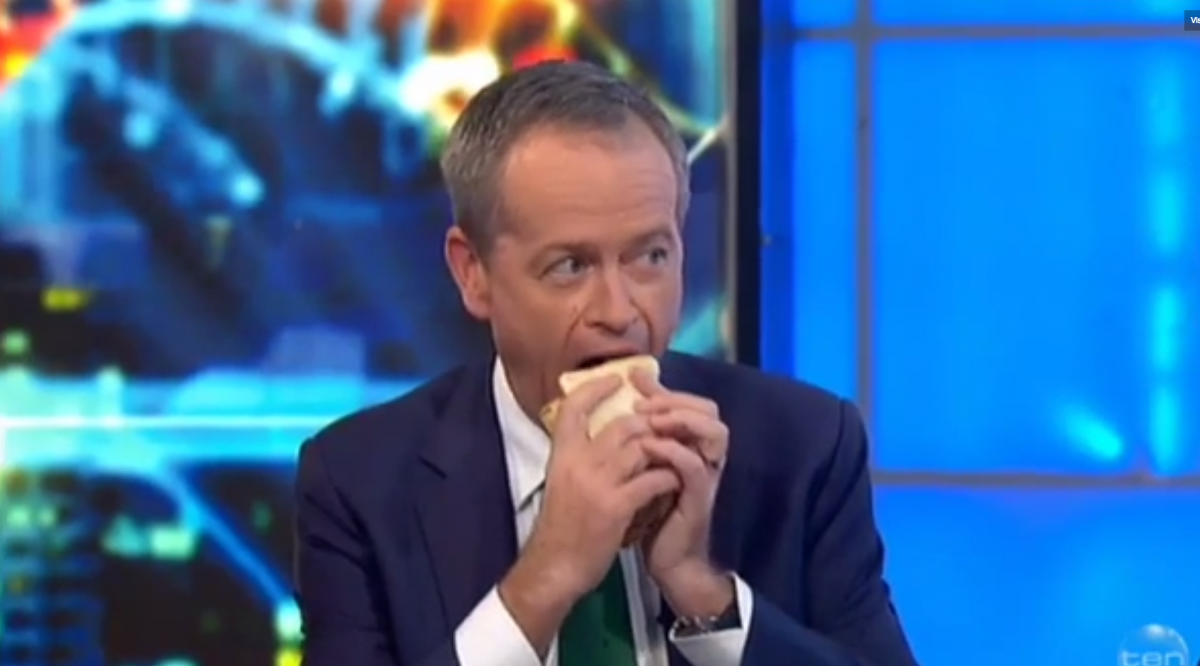 Bill Shorten enjoyed a surprisingly successful election day but for one blemish involving a sausage in bread.

The Labor leader caused uproar on Saturday when he bit into a traditional polling centre sausage in bread at its middle, rather than from the end.

He learned his lesson from that mishap during a do over on Network Ten’s The Project on Monday night, biting into a sausage in bread from its end rather than the middle.

• Australia’s vote chaos: what happens next?
• Pauline Hanson: ‘Malcolm must have lost my number’
• AFP looking at ‘Mediscare’ texts

“What happened with the sausage? Is that how you usually eat a sausage?” The Project‘s Peter Helliar asked him on Monday evening.

Mr Shorten responded: “If you’re looking for the meat – I’m reducing my carb loading – I’m going straight for the meat [in the middle of the crusty bread, not at the end].”

After this exchange, Helliar handed Mr Shorten a sausage in bread, prompting the politician to ask: “We’re not going to have a sausage off, are we?”

Compare the below photo of Mr Shorten eating the election day delicacy on Saturday to the video of him eating one on Monday beneath it. You’ll see how he made up for the faux pas.

.@billshortenmp joined us at the desk to talk THAT Medicare campaign, and how to eat a sausage! #TheProjectTV https://t.co/QkDUWv3aEo

Mr Shorten went on to explain that the bread roll he was served on Saturday was too dangerous to approach from its end.

“Have a look at the edge of that roll. You would need the teeth of a great white shark to bite that down.”

Helliar also quizzed Mr Shorten about the way some voting centres opted for fancier election day fodder. On election day there were reports on social media of some polling centres offering gourmet sausages and additions like halloumi and roasted vegetables.

Many on social media approved of the Labor leader’s change of tactics.

Richard Tuffin tweeted: “Turns out @billshortenmp does know how to eat a sausage. Lets just make him the PM right now! #TheProjectTV”

This tweet was in reference to comments made by broadcaster Steve Price during The Project on Friday night.

Price said he would get a tattoo of Mr Shorten on his backside, should Labor win the election.

With a result that is too close to call and a hung parliament likely, the tattoo isn’t out of the question.

Bill Shorten redeems himself with ‘sausage off’