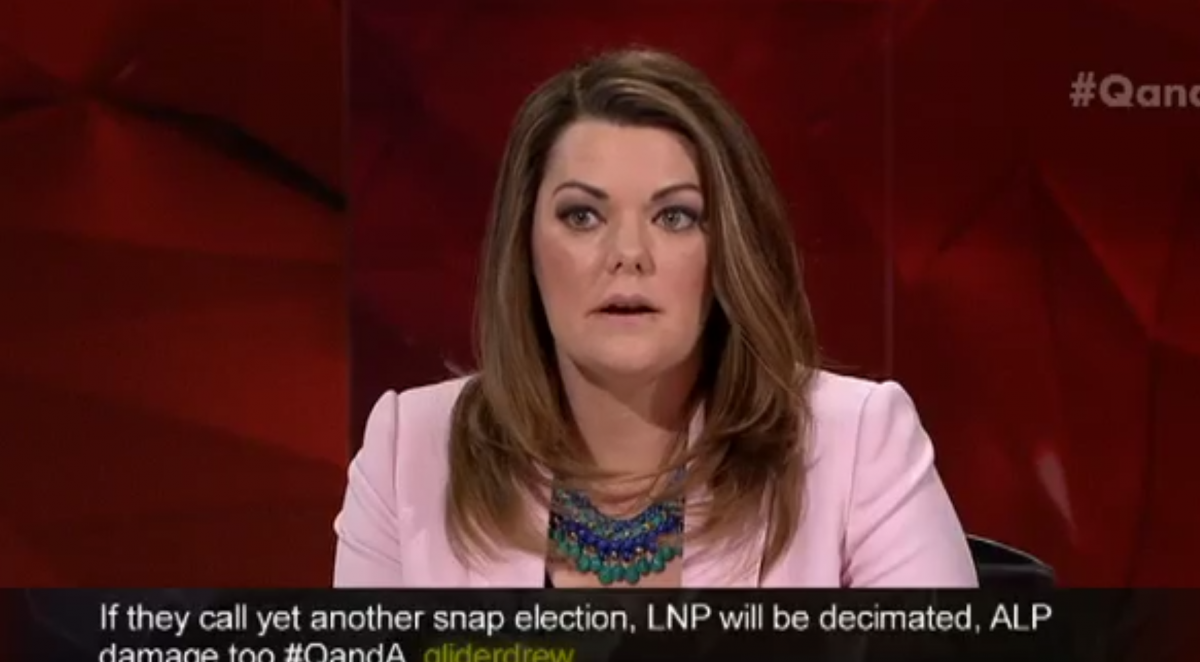 Both Labor and Liberal MPs have attacked the Greens and their senator, Sarah Hanson-Young, during a tense Q&A program on Monday night.

“The Greens, they’re political opportunists who are hiding under a gum tree,” Mr Frydenberg said, echoing a Paul Keating quote.

• Albanese: no plans to challenge Shorten
• Election chaos: what happens next?
• Q&A: ‘I want the old Malcolm back’
• Q&A: Battler skewers panel on tax

“They are simply a protest party.

“We certainly, on the Liberal side, have no philosophical shared beliefs with the Greens.

“Despite all Richard Di Natale’s grandstanding, it hasn’t been a good election for the Greens.”

Mr Bowen was similarly scathing: “The fact of the matter is, with respect, Sarah, you won one seat in the House of Representatives. One.

“That does not give you the right to determine the policies of the government of Australia. You get one vote in the House of Representatives, the Labor and Liberal Party will be around 70 votes in some regard.

“You can put your case, but it takes two to tango. We’re not on the dance floor.”

As of Monday night, Saturday’s election result was still unknown. Neither the Coalition nor Labor won enough seats to form a majority. A hung parliament is being widely tipped.

This means crossbenchers, like the Greens, could be called on to help either major party form a 76-seat majority in the House of Representatives.

The Coalition and Labor ruled that possibility out before the election and the responses from Mr Frydenberg and Mr Bowen on Q&A seemed to back up that commitment.

‘Winner-takes-all attitude shunned by the people’

Given the swing of votes that flowed toward independents, minor parties and the Greens in the election, Senator Hanson-Young argued voters wanted these representatives to have more of a say in the government’s work.

“I think this whole discussion and argument about, ‘We govern on our own or not at all’ – I’m sorry, but the Australian people have voted,” she said.

“They voted on Saturday, and they voted for a variety of different voices in both the House of Representatives and the Senate.

“I think we have to respect that. Our job now, as parliamentarians, whatever colour we wear, is to roll up our sleeves and work out how we can actually work together.

“The winner-takes-all attitude is what has been shunned by the Australian people. They’ve had enough of it.”

“I hope we’re going to see, in the period ahead, this injection of alternative voices and minor parties bringing the focus on young people and the future of the country.”