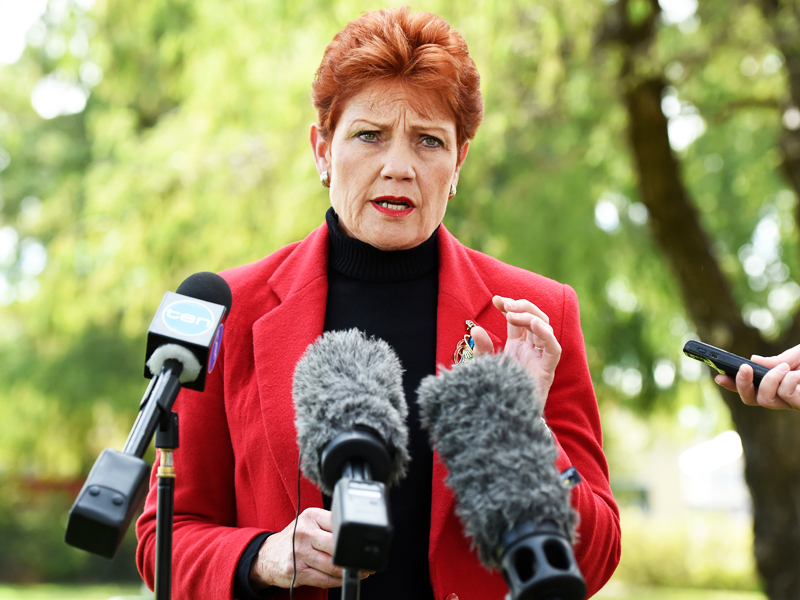 Pauline Hanson has outlined her agenda for when she takes office in the Senate.

Her first priorities, she told reporters during a press conference in Brisbane on Monday, are a royal commission into the banking sector and a “cleaning up” of the family law court.

Ms Hanson is expected to secure a Senate spot for Queensland, and believes her One Nation party could pick up other upper house seats in NSW and Western Australia.

She wants a royal commission into Islam, a blanket ban on the construction of new mosques, and a ban on the wearing of Islamic headdresses.

“Do you want to see terrorism on the streets here?” she said, the ABC reported.

“I’m not preaching hate, I’m trying to have a debate and a royal inquiry into it.”

Ms Hanson clarified that she does not want to deport Australian Muslims.

“You can’t deport the Muslims that are here and, look, I’ve spoken to Muslims, I think I’ve got a couple of Muslims who are members of my party.”

Ms Hanson said she was “not sold” on climate change: “I’m definitely not sold on it. I want the true facts to be put out to the people.”

She supports zero net immigration — and warns that Australia is being “swamped by Asians”.

“What we’re doing with high immigration, we’re putting a strain on our infrastructure, whether it be the housing, hospitals, water, sewage, nursing homes, schools, it’s clearly that’s the problem we have.

“You go and ask a lot of people in Sydney, at Hurstville or some of the other suburbs. They feel they have been swamped by Asians.”

She is also opposed to foreign ownership of Australian land.

“A lot of Australians feel that Asians are buying up prime agricultural land, housing, you ask the people in Melbourne how they feel about it as well,” she said.

“As far as work, increased immigration is not the answer to creating jobs in Australia.”

The Queenslander also supports the introduction of a national identity card, which she linked to the issue of welfare.

“I’d like to see [the card] introduced. I believe that our welfare system has been abused and it needs to be reined in if we have a chance of pulling back our national debt.”

Ms Hanson is likely to hold significant power in the Senate as one of a host of crossbench senators with whom the new government, Coalition or Labor, will need to negotiate.