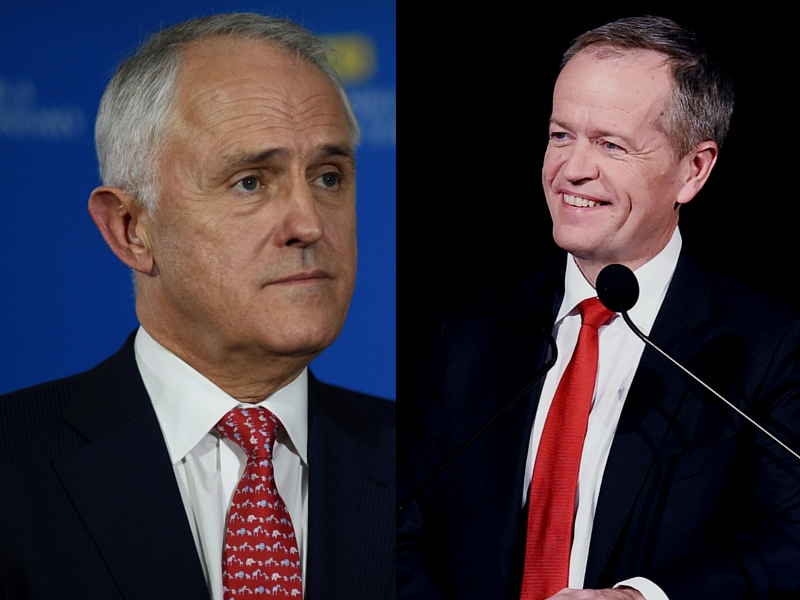 “His own party knows he is not up to the job,” Mr Shorten told reporters in western Sydney on Monday.

The opposition leader said the Prime Minister had made a bad situation worse with Senate reforms that could lead to One Nation having three senators, and had led the nation into instability.

• Australia’s vote chaos: what happens next?
• Pauline Hanson: ‘Malcolm must have lost my number’
• AFP looking at ‘Mediscare’ texts

Mr Bolt has called for Prime Minister Malcolm Turnbull to gracefully resign before he does even more damage as Liberal leader in the wake of Saturday’s election result.

He believes Mr Abbott can fix what Mr Turnbull has broken, following a “near-total catastrophe” at the polls.

Neither the coalition or Labor has won enough seats in the lower house to form a majority government.

The most likely outcome is a minority coalition government — with 75 seats — that relies on one or two crossbenchers for support.

Mr Turnbull has “ditched the Liberal’s base, Liberal principles and even the Liberals’ party colours to campaign on virtually nothing but a fantasy tax cut for business,” Mr Bolt wrote.

In February, Mr Turnbull was still popular in the polls, but in the five months that followed he dropped out of favour, dragging his likely successors, Treasurer Scott Morrison and Deputy Leader Julie Bishop, with him.

Mr Morrison takes the blame for the superannuation tax grab that pushed so many Liberal supporters away, while Ms Bishop was described as “totally clueless” after trying to explain the super policy on radio.

“This serial survivor [Ms Bishop] has also made the phrase ‘loyal deputy’ the biggest joke in a party that knows her better as a Lady Macbeth, but without the scruples,” Mr Bolt said.

He then said while Abbott was not “perfect”, he was a far better option than the “Wentworth Waffler”.

“Abbott is not the perfect answer.

“His public image is bad and many journalists have banked their reputation on painting him as an idiot.

“Still, he’s acknowledged his mistakes and time is making him seem better already. Almost every member of a focus group shown on Sky News last week praised Abbott as a man of conviction, as opposed to Turnbull’s flim flam.

“Abbott is also a far better campaigner than Turnbull … Abbott won big swings in two campaigns he led and Turnbull has in his first, almost lost the lot.

“The Liberals need not just a leader to win over the voters but to unite the party Turnbull has torn apart.”