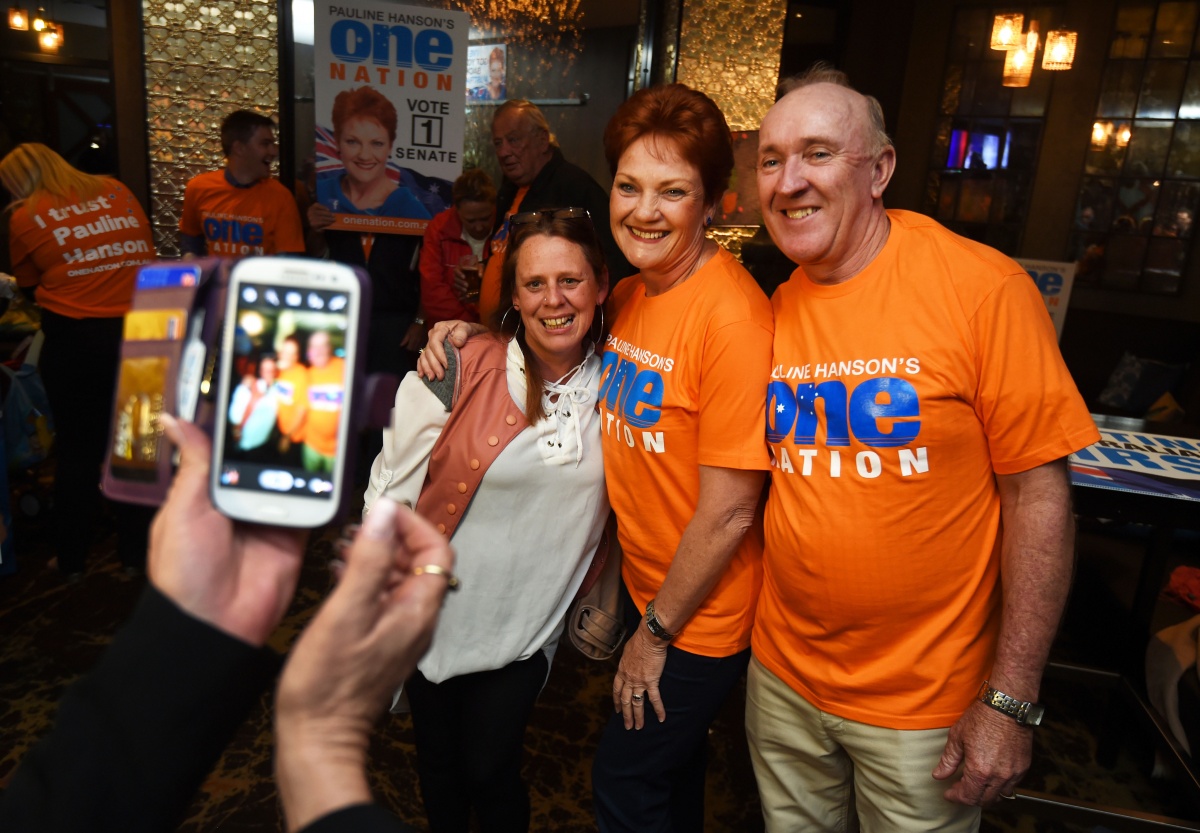 Pauline Hanson is back after 18 years in the political wilderness and it took just a matter of minutes for her to confirm she’s still at her outspoken best.

While it may be some time until the makeup of the federal government is known, Ms Hanson looks to have secured a Queensland Senate seat and a platform for her right wing, anti-immigration views.

Speaking with Channel Nine’s Lisa Wilkinson from her campaign headquarters as part of the broadcaster’s election night coverage on Saturday, Ms Hanson unleashed her wrath after taking offence at a question.

A jubilant Ms Hanson, flanked by supporters, was asked by Wilkinson what she had learnt since being voted out of Parliament in 1998.

Celebration quickly turned to condemnation as the One Nation Party boss turned on the Channel Nine personality.

“You have got to be kidding,” the clearly furious Queenslander replied. “Hold on a minute. Has the Liberal, Labor or Greens learnt anything?

“I don’t need to listen to anything. I know what the people are thinking and how they are feeling. So let’s get this country on track.”

After the interview, Wilkinson insisted she said “lessons”, not “listen”.

“I have been told,” a grinning Wilkinson replied.

.@PaulineHansonOz has emerged as a comeback queen, confident her party will pick up 2 QLD seats in Senate. #9Today https://t.co/8Nktmuv5WU

Labor Senator Sam Dastyari, who was part of the Channel Seven election coverage, also incurred Ms Hanson’s ire when he invited her out for a Middle-Eastern takeaway on air.

“Pauline, right now I will invite you to join me in Sydney and I will take you out for a halal snack pack … whenever you want,” Dastyari, who is of Iranian heritage, said, using a colloquial term for a kebab box.

Ms Hanson was not tempted.

While Ms Hanson’s on-air anger was generally met with amusement, he political opponents in The Greens don’t see the funny side to her return to politics.

“We won’t roll over like [former prime minister] John Howard did when Pauline Hanson first came on to the political scene federally.”

Ms Hanson, the founder of One Nation and a former Queensland Liberal MP,  could bring with her running-mate Malcolm Roberts with her in the Senate.

One Nation is also in the running for Senate seats in NSW, Western Australia and Victoria.

Ms Hanson said she had no problems working with any parties.

“If they have got a problem with me, that’s their issue, not mine,” she said.

“I’ve got 20 years’ experience in politics and I believe that we need maturity in the parliament to start passing legislation that is right for the people and our future generations.”

Pauline Hanson’s back and we better get used to it