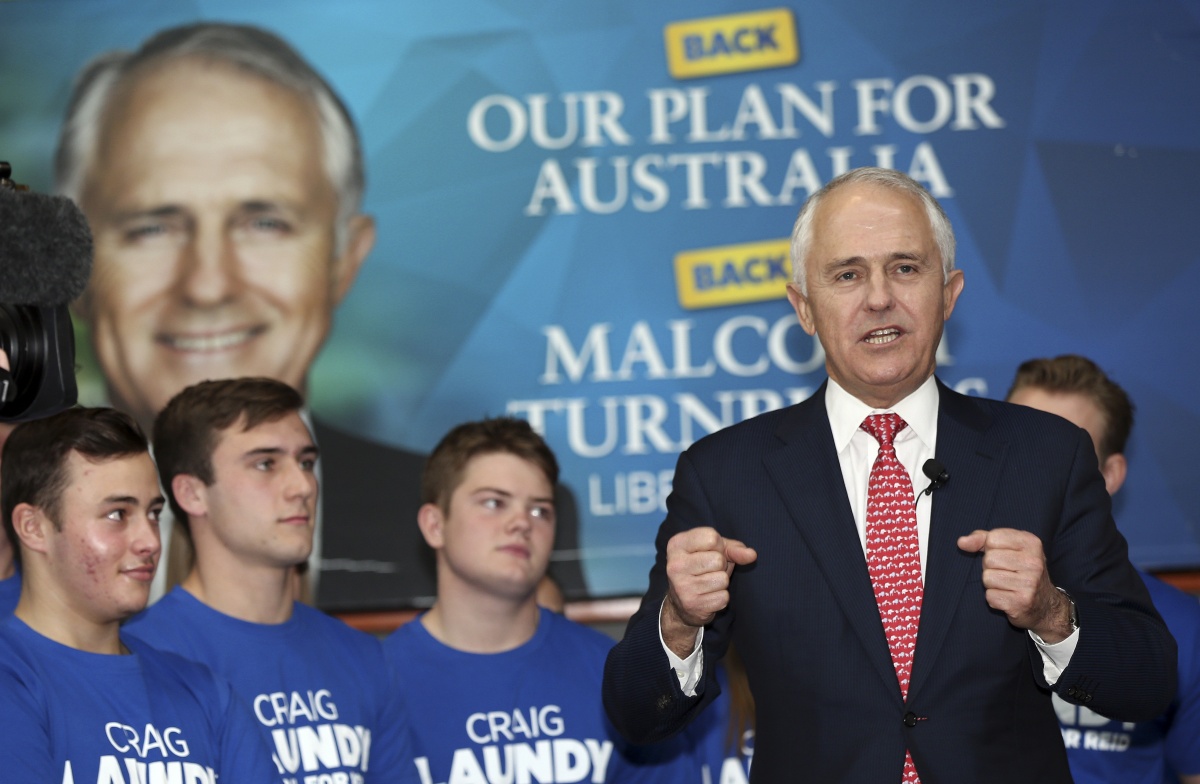 With the Coalition’s hold on majority government in the balance, Malcolm Turnbull’s hope for political stability in Australia has all but evaporated.

As counting closed, the Coalition was short of reclaiming government.

It has 70 seats to Labor’s 67. The Greens and the Nick Xenophon Team have one apiece, other parties have three. Eight seats remain in doubt.

The fate of the Turnbull government rested with the pre-poll and postal vote count over the next week.

• Election 2016: all the winners and losers
• Shorten may have landed a killer blow
• Oakeshott complains about absentee ballots
• Hanson, Xenophon shake up Senate

At his 12.30am speech at Sydney’s Wentworth Hotel Mr Turnbull said that he had “every confidence” of forming majority government after the Australian Electoral Commission completed counting the outstanding 30 per cent of pre-poll and postal votes, expected on Tuesday.

The best Mr Turnbull can hope for is 74 seats, two short of an absolute majority. It would need the support of two independents to govern.

Labor would probably need all four independents if, as pledged during the election campaign, it refused to enter any arrangement with the Greens.

Even if the Coalition forms government, it may struggle to secure sufficient votes in a special joint sitting of the parliament to validate the double dissolution election.

Also in doubt could be the Turnbull-Morrison budget delivered on May 3.
The nightmare scenario for Mr Turnbull is the possibility that the National Party, with its 19 seats, using its leverage to force concessions for regional Australia in negotiations with the Liberal Party for a new Coalition agreement.

On two party preferred terms Bill Shorten’s Labor Party has scored a swing of about 3 per cent swing and picked up at least 13 seats, not sufficient to reach the 76 seat majority but close to starting a competition to form a minority government.

The new Senate is already treacherous for a new government with the Nick Xenophon Team likely to return two to three senators in South Australia, with Jacqui Lambie in Tasmania, Derryn Hinch in Victoria, and Pauline Hanson in Queensland (and possibly New South Wales) with an expected nine Greens holding the balance of power.

While the Labor Party’s primary vote remained historically low, the significant indicator from the 2016 election has been the record high vote for “others” – Greens, minor parties and independents in both the House of Representatives and the Senate.

Mr Morrison remained confident that the Coalition would be able to advise the Governor General it could form majority government in the House of Representatives.

A triumphant Bill Shorten told party supporters at 11.30pm on Saturday that Mr Turnbull could no longer claim a mandate for his budget measures.

Labor appears to have won two Brisbane seats, three in north Queensland, two in Perth, four in regional New South Wales, one in South Australia, two in Sydney and three in Tasmania.

While Mr Shorten’s speech was upbeat many commentators noted that Labor’s momentum across Australia was not matched in his home state of Victoria where it failed to make any gains.

In addressing Liberal supporters after midnight Mr Turnbull attacked the Labor Party over its Medicare scare campaign, saying: “This was the most systematically and well funded lie ever peddled in Australian politics.”

He said some text messages to electors warning that Medicare was about to be privatised purported to come from Medicare.

“It was an extraordinary act of dishonesty. No doubt the police will investigate,” Mr Turnbull said.

Mr Turnbull defended the decision to call a double dissolution election, saying it was not a political tactic but necessary to secure the government’s Australian Building and Construction Commission to confront thuggish and lawless conduct by building trade unions.

Mr Turnbull’s speech was fiery, aggressively directed to Labor, called for national unity to face fiscal challenges but without any sense of self-reflection or contrition over the near loss of government.

Quentin Dempster is political editor of The New Daily.