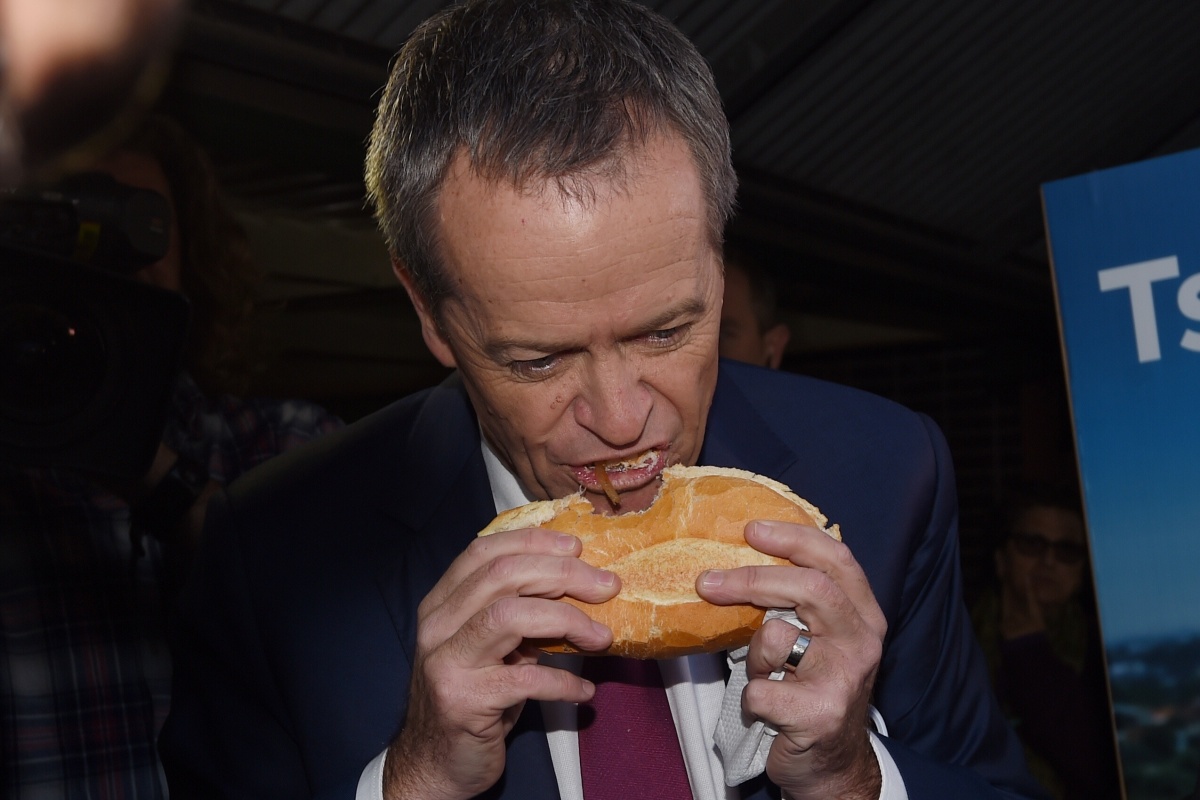 On a day where Australia decided which party would form government, the way in which Bill Shorten and Malcolm Turnbull approached a sausage in bread at polling booths dominated discussion.

Mr Shorten was lampooned for his unorthodox bite into a sausage in bread, while Mr Turnbull outraged onlookers for not ordering one of the election day delicacies.

• Election 2016: all the winners and losers
• Shorten may have landed a killer blow
• Turnbull challenge now all about negotiation
• Yes, there were two victory speeches
• Oakeshott complains about absentee ballots
• Hanson, Xenophon shake up Senate
• Voters cranky about long queues

But as the nation struggled with the leaders’ approach to food, animals also became a focus of election day.

Added to Tony Windsor’s hostile reception for some journalists and reports of ear biting between political volunteers in Melbourne, election day 2016 was not short of wackiness.

Early voting is going off. They even have an early voter sausage sizzle #democracysausage pic.twitter.com/BaS0nrOV8n

But sausage talk hit its crescendo in the afternoon, when Mr Shorten bit right into the middle of his sausage encased in a roll, instead of munching it from the end.

Love the @billshortenmp #democracysausage controversy and fair enough, sort of act that can cost you an election!! 😂 pic.twitter.com/NkbQouPEF2

The unflattering image reminded the Telegraph in the UK of a similar fiasco which haunted ex-British Labour leader Ed Milliband. He lost the 2015 election in Britain, and one of his campaign low points was this picture of him with a bacon sandwich:

Meantime Mr Turnbull had his own sausage controversy on election day. ABC reporter Leigh Sales claimed the he didn’t opt for a sausage in bread at his Wentworth polling booth. Instead, the agile and innovative PM went for a green tea.

Former independent MP Mr Windsor, who is attempting to reclaim his former seat of New England from Nationals leader Barnaby Joyce, took the strange step of banning all News Corp journalists from his Tamworth campaign headquarters.

When asked by the ABC why he had made the decision, Mr Windsor said: “Well, I don’t want them here.”

When asked if the decision was undemocratic, he said: “We pay the rent on the office.”

The Australian newspaper (owned by News Corp) published a story earlier this week alleging Mr Windsor was a schoolyard bully 50 years ago.

He said he was consulting his legal team about those allegations.

Dogs and gorillas show up at polling booths

Once everybody had boasted about their democracy sausage, #DogsAtPollingStations was the next hashtag to take off on Twitter:

Many also left tributes to Harambe the gorilla on their voting cards. Harambe was killed by zoo staff in May, after a child fell into his enclosure at a Cincinnati zoo:

There was also this guy and his pet ferret:

Courtesy of David baker, voting in Hughes today. Looks more like Grayndler behaviour to me pic.twitter.com/UL8ROA8onl

This was probably as unsavoury as election day got. The first incident to cause recoil was this man who voted in his ‘speedos’. Warning, image contains offensive language:

On Saturday afternoon Fairfax Media reported a Greens volunteer was allegedly bitten by a “backer” of assistant treasurer Kelly O’Dwyer.

The alleged incident occurred at a polling booth in Ms O’Dwyer’s seat of Higgins where she was under threat from the Greens’ Jason Ball.

Victoria Police were told a 48-year-old woman was approached by two men on Friday evening.

A struggle took place after the men made comments about the Greens and the women tried to photograph the men.

The woman, who was part of a group of Greens’ supporters, had a sore thumb after the incident, according to reports.

Election 2016: the weird, wacky and wonderful