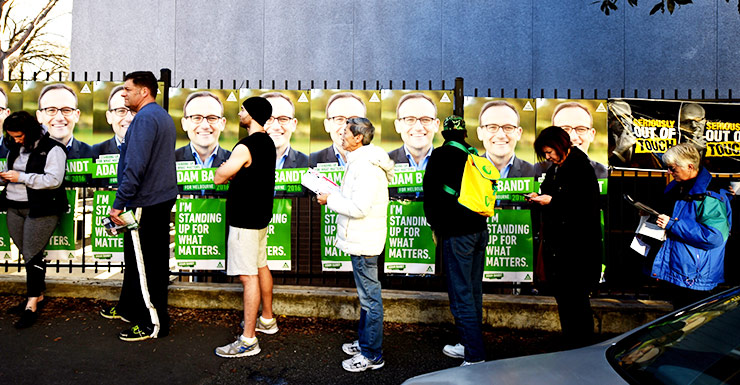 Australians attempting to vote early this morning faced lengthy lines at the polling booths – with waiting times at some stations around the country blowing out to more than an hour.

Voters took to Twitter and the ABC’s live election blog to complain about long lines.

“Worst year set up for voting. Was there for nearly an hour,” Laura Mousley wrote.

Jean said the line at Mount Lawley Primary in Western Australia was “getting ridiculous but everyone is happily soaking up the sun”.

“It always tends to be busier in the morning … and tends to dry up in the afternoon,” he said.

“We often see some polling places, especially in centre of a town, can be quite busy.”

Mr Ekin-Smyth recommended voters either search for another nearby polling booth, or return in the afternoon.

“I suggest people look for an alternative if they can. Otherwise in the afternoons it tends to get a bit quieter,” he said.

“If someone get in the queue at 6pm their vote will count. We don’t shut them out.”

However, some voters said they were able to walk in and out with no wait at all.

Brett who voted at East Kempsey just after 9:00am said he had no problems.

“Three issuing officers ready and waiting. Five voters in the eight booths. While I was voting six people came in all at once — and all had their ballot papers in two minutes.”

The AEC has 75,000 people working around the country in about 7,000 polling stations.

People are deadset waiting half an hour for a sausage at Old Parliament House. Not to vote, for a sanga. #ausvotes pic.twitter.com/YBiHP3a1sF

Planning to vote at the Office for Recreation & Sport in Hindmarsh? Bring a book for the queue. #ausvotes @abcnews pic.twitter.com/gTXvreCG2T

The lines are long both for snags and votes at Annandale school, some say they’ve waited 45 mins! #ausvotes @abcnews pic.twitter.com/Hm5n2mxPV2