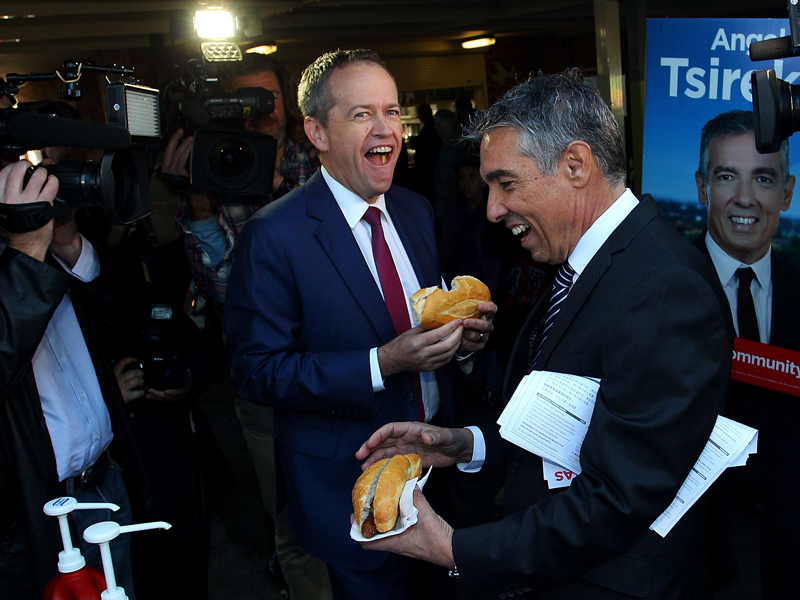 Opposition Leader Bill Shorten has launched a final attack on Malcolm Turnbull as he attempts to become Prime Minister.

Mr Shorten, describing today’s polling as a “referendum on Medicare”, compared PM Mr Turnbull to a “mugger who’s taken your wallet promising not to rob you again”.

Mr Shorten told Fairfax: “Australian voters understand that you can have Malcolm Turnbull or you can have Medicare, but you can’t have both.

“People are aware that a vote for me and for Labor [means] we can protect Medicare as we know it now.”

Australians will flock to more than 7,000 booths — but about 2.5 million people have already cast their ballots in pre-poll voting.

Both major party leaders started their days in Sydney, with Mr Turnbull casting his vote at the Double Bay Public School in his seat of Wentworth.

Mr Turnbull and his wife Lucy were joined by a large media contingent as they met with voters and he repeated his call for voters to choose the Coalition and avoid a hung parliament.

“As I said there’s never been a more exciting time to vote for a stable majority Coalition government, an economic plan that secures our future,” he said.

“What’s the biggest issue in the seat of Wentworth? Security of our economy, the future for our children and grandchildren.”

Mr Shorten spent the morning campaigning in the key marginal seats of Reid, Lindsay and Macquarie in western Sydney before flying to Melbourne to cast his vote in his electorate of Maribyrnong.

“Labor is very competitive,” he said.

“I know that some of the conservative political papers have run their drum beat and whatever happens, the Liberals will win.

“The fact of the matter is that Labor’s agenda has been speaking to the daily lives and experiences of Australians.”

Government ‘not taking anything for granted’

Today’s Newspoll, published in the Weekend Australian, shows the Coalition leading by 50.5 per cent to 49.5 per cent on a two-party preferred basis.

It also shows support for minor parties and independents could be at its highest level since the 1930s.

Finance Minister Mathias Cormann said the Government was not “taking anything for granted”.

“This is a close election,” he told ABC News Breakfast.

“Every single vote today will matter.

Labor needs to gain 21 seats to take government from the Coalition, but the Coalition only needs to lose 15 to raise the possibility of a hung parliament.

“If you’re going above the line [on the white Senate paper], instructions are to number at least six parties of your choice — one to six — you can do more,” he said.

“Or, number at least 12 individual candidates of your choice below the line and you can do more there too.”

The prospect of a higher vote for minor parties and independents has buoyed the hopes of The Greens.

The party is targeting a number of seats across the country, with a particular focus on suburban Melbourne and the Labor-held seat of Batman.

Greens leader Richard Di Natale was out early, talking to voters as they lined up in the Victorian electorate of Reservoir.

He said he was confident of his party’s chances in Batman.

“If we don’t make that breakthrough at this election, we’ll certainly make it at the next, we take a long-term view,” Senator Di Natale said.

“But look, the mood is very, very positive so I’ve got a sneaking suspicion we’ll get over the line.”

He said the Greens were also looking to make “huge inroads” in the Victorian seats of Higgins, Melbourne Ports and Wills, as well as Labor frontbencher Anthony Albanese’s NSW seat of Grayndler.