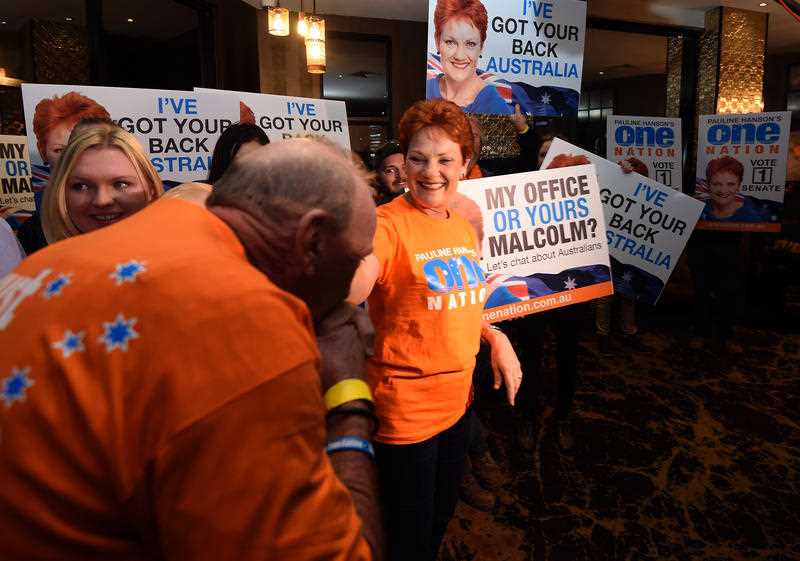 Pauline Hanson and Nick Xenophon will play a key role in the new Senate.

Senator Xenophon was on track on Saturday night to pick up three South Australian seats in the upper house.

Ms Hanson, the founder of One Nation and a former Queensland Liberal MP, will take a Queensland Senate seat and could bring with her running-mate Malcolm Roberts.

One Nation is also in the running for Senate seats in NSW, Western Australia and Victoria.

Jacqui Lambie, a former Palmer United Party senator, will hold her Tasmanian seat and could bring another candidate with her.

Broadcaster Derryn Hinch declared himself the winner of a Victorian Senate seat, but on official figures was still polling short of a quota.

The Coalition will at best win 34 Senate seats, up one on the previous result, while Labor is unlikely to hold more than 23, down two.

The Greens are on track to take eight seats, down two on the previous result, leaving a crossbench of up to 12 members.

If the final result is 34 to the Coalition, and Malcolm Turnbull holds on to power, the Coalition will need five crossbench votes to get its laws through parliament.

Ms Hanson said she had no problems working with any parties.

“If they have got a problem with me, that’s their issue, not mine,” she said.

“I’ve got 20 years’ experience in politics and I believe that we need maturity in the parliament to start passing legislation that is right for the people and our future generations.”

The Senate election was held on new rules that were expected to make it harder for independents and minor parties.

But the double-dissolution election reduced the quota of votes needed to win a seat, counteracting the law changes.

Hanson, Xenophon shake up the Senate