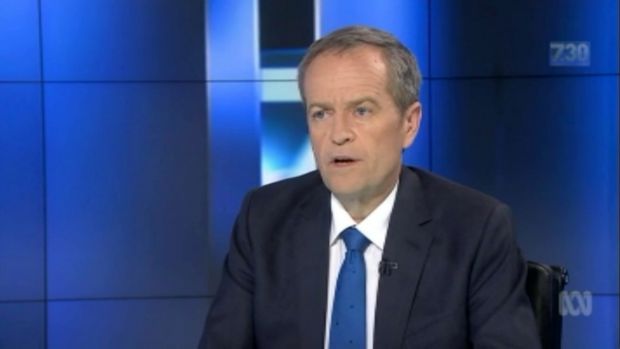 Opposition leader Bill Shorten has endured a tense interview with Leigh Sales on ABC’s 7:30 program on Thursday evening, where Sales tersely instructed Mr Shorten to “wrap it up”.

Sales challenged Mr Shorten on running “scare campaigns” about a GST rise and Medicare privatisation, which the combative host labelled as “overreaching”.

“I think healthcare is the key issue,” Mr Shorten said at one point, as Sales tried to change the subject.

“We did go through Medicare a lot last time we spoke,” Sales then pointed out.

Shorten responded: ”Well it was only just because you were challenging what I was saying, and I just wanted to say –“.

Sales interrupted: “Wrap it up.”

Throughout the campaign Mr Shorten had been telling the public that Mr Turnbull and the Coalition would raise the GST and privatise Medicare if they won the election.

He continued to campaign on these “scare campaigns”, despite Mr Turnbull repeatedly ruling out the changes.

Sales then tried to push Shorten on taking Prime Minister Malcolm Turnbull “out of context” at another point in the campaign.

“This week you claimed a remark by Malcolm Turnbull, that what political parties say isn’t what they do, and you said it was the defining moment of the campaign,” Sales said.

“You were exposed for taking it out of context, because he was talking about Labor, not about himself. Was it in fact the defining moment of your campaign, illustrating your tendency to overreach?”

Shorten rubbished that claim, insisting repeatedly that Mr Turnbull had said “political parties”, meaning he was talking about the Liberal Party too.

Sales returned: “In the context of a whole discussion about Labor.”

Shorten went on: “Yes, but when you use the plural ‘political parties’, you’re not talking
about two Labor parties, he’s talking about his own. The truth of the matter is, this fellow is so confident that he’s won the election that he’s already giving himself a leave pass to break his promises. He said political parties, plural.”

‘Wrap it up’, Leigh Sales gets short with Shorten