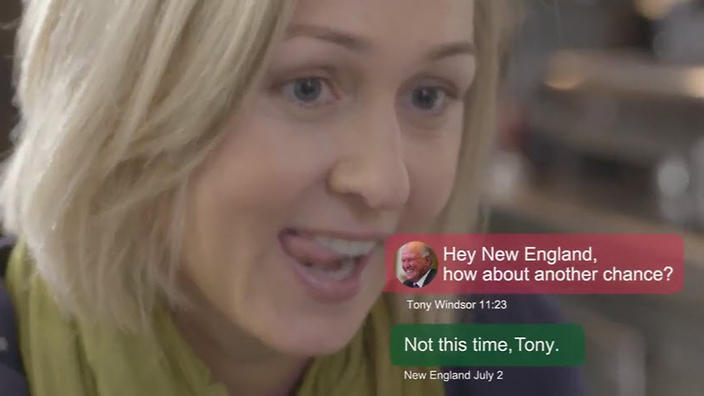 With three days to go in the federal election, the questionable tactics to motivate any remaining undecided voters were in full force.

News Limited reported it had statutory declarations signed by old school chums of Tony Windsor claiming that 40 years ago he was a bully.

Mr Windsor is in a monumental struggle with Deputy Prime Minister Barnaby Joyce’s for the seat of New England he once long held.

A clever, well-produced TV ad for the Nationals showed one woman, referring to a phone text message from “Tony Windsor – New England,” saying her dalliance with Tony was over but now he wanted her back. Another woman advised he’d “gone with Julia” and consequently they agreed to send Tony a return text message to move on.

Mr Windsor told the media his wife was offended by the ad and its implication of infidelity.

And on the reports that he was a school bully, he has decried “gutter journalism,” is consulting his lawyers and will not dignify the reports with a response.

“What political parties say is not what they will do.”

What Labor leader Bill Shorten told the National Press Club was the defining moment of the 2016 election campaign has turned out to be sharp use of an out-of-context quote from Mr Turnbull.

“It will go down as the defining moment in this campaign,” Mr Shorten said.

With video from Mr Turnbull’s doorstop interview with travelling press at a steel works in Brisbane, the Labor Party rushed out a TV ad to substantiate its claim that the Liberals could not be trusted.

While Mr Turnbull’s remarks may ring true for many electors, the context was his reference to Labor Party backflips.

The exact quote, in response to a journalist’s question about exactly how the government could deliver its ‘zombie’ budget savings through the next Senate, is:

“The other point I would make is that what political parties say they will support and oppose at one time is not necessarily ultimately what they will do. You have seen the Labor Party has opposed many measures of ours at which they have subsequently supported or subsequently changed their position on. The best-known of those is obviously the School Kids Bonus … .”

The measures were met with deep skepticism by the Australian Council of Social Services (ACOSS), which represents the welfare and poverty sectors.

After three successive budgets featuring welfare crackdowns “this is the last place the Coalition should be looking for savings to fund new election spending promises,” Ms Goldie said.

On 7.30 Mr Morrison denied cynicism or political expediency in the calculations, or timing of the announcement of the welfare compliance measures.

Peter Dutton touted as next Liberal leader as he claimed victory in Dickson
‘The urgency of the situation’: WHO steps in as monkeypox cases erupt around the world
Volodymyr Zelensky: How war will end as Ukraine ‘breaks backbone’ of Russian army
Jim Chalmers decries Coalition waste as Labor hits the hustings amid downpours in Queensland
Anthony Albanese, Scott Morrison cast their votes in Sydney
Australian aces at French Open out to show there’s life after Ash Barty
The contradiction in PM’s economic plan
Today's Stories

Below the belt: sharp tactics and dirty tricks