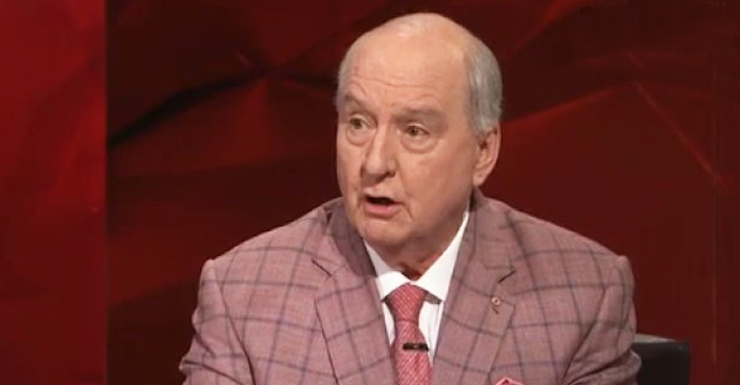 Alan Jones has apologised to Jacinda Ardern over his comments relating to the Pacific Island Forum. Photo: ABC

Much of the discussion on the final Q&A before the election centred on Australia’s debt, but it was hard to keep your eyes off Alan Jones’ getup.

Langton and Jones found themselves as unlikely allies in a heated discussion about Australia’s intergenerational debt.

Mr Jones argued neither party likely to be elected on Saturday was willing to “be honest” with Australians about the current debt repayments that could buy a “new primary school every eight hours”.

‘Be honest about debt’

The 2GB broadcaster slammed both sides of politics for “treating the public as fools” and failing to forecast significant dents in spending.

Using the example of former Prime Minister Paul Keating some 30 years ago, Jones argued it was possible for governments to honestly communicate the need to raise taxes or cut spending due to debt.

“We are heading towards half a trillion dollars of debt and both parties are pretending to have an answer to it, and they haven’t,” Mr Jones said.

He said the government was only cutting back 0.9 per cent of expenditure, while adding $85 billion to debt.

“Now they’re complaining about Labor saying that they’re going to add another $16 billion – that isn’t even 1% of the total expenditure over the four years.

“How can we spend all of this money and leave the kids to pay it off?”

Perhaps coming as a surprise to even Ms Langton, she felt the same.

“I agree with Alan Jones for once in my life,” she admitted as the audience laughed.

“And unfortunately electoral politics disguise the seriousness of the problem from ordinary people.”

‘Everybody wants Aborigines to shut up’

Another moment that broke away from political manifestos came after two Aboriginal women asked about housing shortages in their communities.

Professor Langton answered with the honesty of a panel member not bound to represent the views of either political party.

“I’ve been watching elections for 50 years and it’s the same old answer,” she said.

“Everybody wants Aborigines to shut up during the election because both sides of politics … don’t want backlash.”

Professor Langton argued that parties avoided questions about Aboriginal affairs because if they were seen to be supporting Indigenous people they faced losing votes from “racists”.

Staggeringly, Jones and Langton again agreed on the subject of unnecessary NGOs in Aboriginal communities.

“All this money goes to indigenous Australia and it gets swallowed up by white bureaucrats.”

Disappointingly for viewers, audience questions about popular election issues such as negative gearing, Labor’s ‘Medi-scare’ campaign and a potential treaty were left unanswered.

Asked what could be done about the staggeringly-low rate of first home owner buyers in capital cities, both Ms Plibersek and Mr Cormann towed their party’s line about negative gearing’s effect on house prices.

Meanwhile, Ms Plibersek claimed Labor had “30 years of evidence” that the government was planning to privative Medicare – failing to put rest what Malcolm Turnbull has called “the biggest lie of the campaign”.

Damn that jacket! Trying to concentrate but #AlanJones‘ attire is making me want to pull out a picnic rug & sip on a berry smoothie. #QandA

@mrngunnawal But do we REALLY need #AlanJones in THAT suit on #qanda to lecture us tho?

#qanda
Who even wears red & purple together!?
And #AlanJones expects ppl to take him seriously?
Not a person for TV
No wonder he’s on radio

‘I agree with Alan Jones for once in my life’