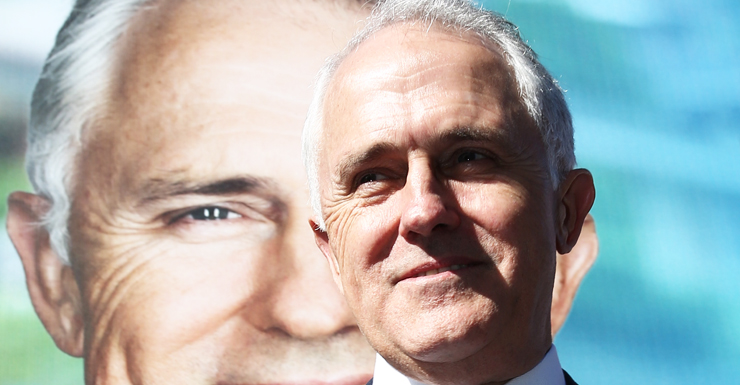 Malcolm Turnbull faces a constant battle convincing his party's conservatives that he is right man for the job.

It looks like the Prime Minister has his old mojo back. During the campaign, innocent bystanders have accused him of appearing detached from the unsavoury business of winning over voters. Not anymore. At his “launch” campaign rally on Sunday, Turnbull came out swinging at Bill Shorten and the rising threat of the minor parties.

He warned the 30 per cent of voters who the polls say are fed up with the major parties: now is not the time to desert him. He even went so far as to name his bogey people: “Lambie, Xenophon, Lazarus or Hanson.” The Greens figured prominently as a reminder of the “chaos and instability” of the Gillard Labor minority government.

The Prime Minister’s claim that only he can lead a majority government ignores the more favourable latest Newspoll. That has the Coalition back in front 51-49 two party preferred. It could just as likely leave Turnbull with most seats but short of a majority. A lot will depend on the size of the win this weekend and how the fierce resistance among the Abbott-aligned conservatives to marriage equality plays out. Some senior moderates believe Turnbull would be wise after the election to ditch the expensive $160 million opinion poll and put it to a vote in the Parliament. The issue is a proxy power struggle within the Liberal party. The moderates accept there would be an enormous internecine brawl but unless a bold move is made early the opponents to gay marriage will do everything in their power to stymie any change. Indeed they want the question to be put in the most unpalatable way and won’t be bound by the result anyway. Attorney-General George Brandis got a taste a few months ago. Rather than have a pre-election fight, he and the Prime Minister backed off their plan to release to the electorate the plebiscite’s wording.

What should not be underestimated is the determination of Tony Abbott and allies like Eric Abetz to keep the Liberal party a predominantly conservative outfit. The role of Treasurer Scott Morrison could prove critical here. But his performance as treasurer is nowhere near as convincing as many thought it would be. A good example: the contradictory shift on how credible 10-year plans are. When Labor came up with a slightly higher deficit after four years than the government, and then to deliver a bigger surplus, he says it’s all incredible magic. But it applies to his business tax cuts “plan” as much as to Labor. Anyone who knows what the economy will look like in four years, let alone a decade, is fortune telling. The blowout by $40 billion of this government’s budget deficits over the past three years testimony to that. What Australians make of it all and how critical Brexit is in boosting the Coalition’s chances is now the big question. Every election is a risky judgement for voters. Paul Bongiorno AM is a veteran of the Canberra Press Gallery, with 40 years’ experience covering Australian politics. He is Contributing Editor for Network Ten, appears on Radio National Breakfast and writes a weekly column on national affairs for The New Daily. He tweets at @PaulBongiorno For more columns from Paul Bongiorno, click here