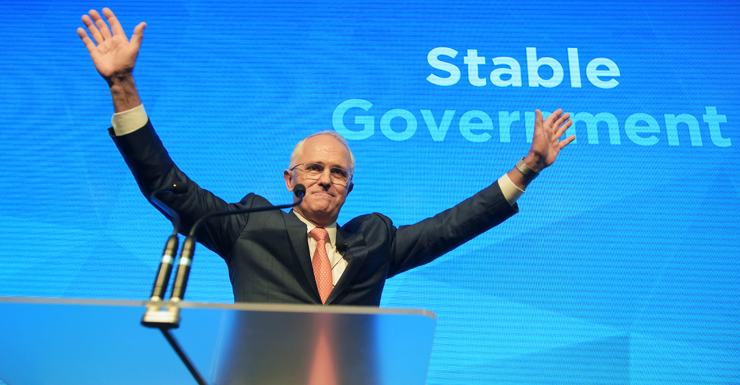 The Coalition now leads in the latest Newspoll as Brexit gives both major parties a stability test in the final week of the election campaign.

The Liberal-National Party is ahead 51-49 on two-party terms and 43-36 on primary votes in Newspoll, The Australian reported on Sunday night.

It follows the majority decision of the British people to withdraw from the European Union, which has wiped trillions from world markets and put the pound into freefall.

In the 48 hours since the announced resignation of British prime minister David Cameron, Mr Turnbull and Mr Shorten, Treasurer Scott Morrison and Shadow Treasurer Chris Bowen have been privately briefed under caretaker conventions by the Governor of the Reserve Bank and the Secretary of the Treasury.

The implications for the Australian economy immediately concern the trading relationship with Britain. If other countries also leave the European Union the instability will spread.

There is intense analysis underway on the gender, age, regional, socio-economic and immigration motivations of Britons who decided to quit the EU to see what can learnt and is relevant for Australia’s domestic politics.

The immediate mantra was stability.

“At a time of uncertainty the last thing we need is a parliament in disarray,” Mr Turnbull told the Liberal Party’s campaign launch in western Sydney on Sunday.

“We will need to renegotiate trade deals in Europe.”

Mr Bowen told a news conference that he could not publicly discuss his briefing from the Reserve and Treasury, except to say: “the major impact comes from global uncertainty.”

“The UK is no longer a top five trading partner. It is a much less intense economic relationship than it was a few decades ago.”

Which party is the better crisis manager?

Mr Turnbull appealed to voters to trust him to deliver Australia through the Brexit-induced uncertainty by the application of “calm heads and steady hands”.

The Brexit bombshell in the final stages of the federal election has raised the question of which party is best equipped to manage any economic shocks.

Questioned on this by the ABC’s Barrie Cassidy on Insiders, Labor’s deputy leader Tanya Plibersek claimed Labor’s crisis management was superior from the global financial meltdown in 2008 with its stimulus rescue response being opposed by then opposition leader, Malcolm Turnbull.

“We protected 200,000 jobs. We got three ‘Triple A’ credit ratings for the first time in Australia’s history. By international standards we were one of the best performing economies in the world,” Ms Plibersek said.

Other issues to be raised from Brexit are Australia’s remaining connections to Britain through the Commonwealth, with the Queen as head of state, and the strategic immigration rate with the business lobby advocating Australia’s population grow to 40 million by 2055.

It all adds up: Labor’s admittedly higher deficit

Treasurer Scott Morrison has been given a free kick through Labor’s admission on Sunday that its projected budget deficit would be bigger over the next four years.

While the Coalition has yet to release its costings, Labor’s spokesmen Chris Bowen and Tony Burke offered no apology for the higher deficit.

They claimed it as a virtue of demonstrable fairness to maintain investments in Medicare, health and education in the face of Abbott-Turnbull cuts.

Labor concedes its costings, certified by the Parliamentary Budget Office and three external analysts as credible given current assumptions, will deliver a deficit $16.5 billion higher than the coalition’s over four years.

One journalist asked Mr Bowen about Labor’s claim: “How can voters possibly see this as responsible and how can you possibly turn around so fast in 2020 to 2021 that deficit from $11.3 billion to a surplus of $1 billion?”

Mr Bowen replied that the government costings included the so called ‘zombie’ savings which would never be passed by parliament.

As the final week of the election campaign begins voters will be blasted with troubling economic news through the Brexit phenomenon.

It is on that issue that Mr Turnbull and Mr Shorten will have to direct their leadership pitches.