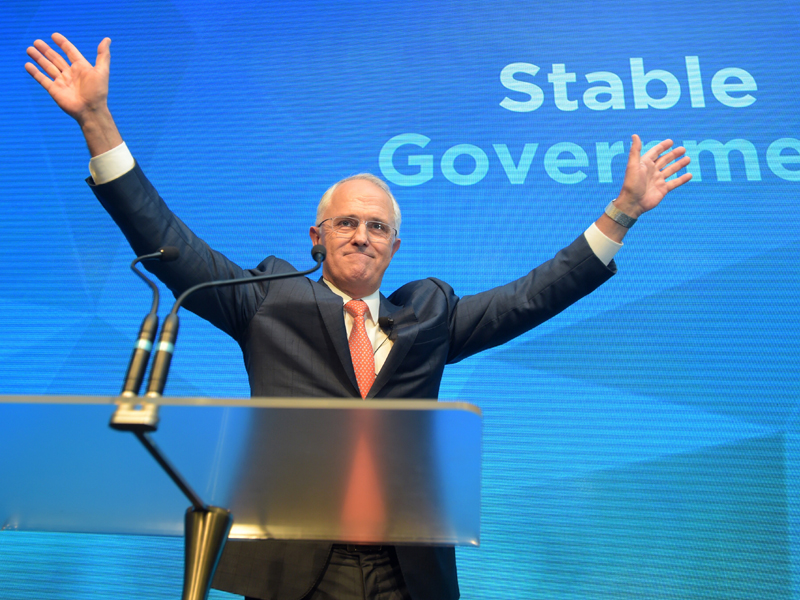 At the Liberal Party’s formal campaign launch at Homebush in the marginal western Sydney seat of Reid, Mr Turnbull made new funding announcements including $50million to help seniors lift their smart phone and digital skills, a boost in mental health programs, and a project to extract illegal guns from criminal gangs.

His emphasis on tax relief for small to medium business was repeated along with a commitment to apply penalties on multi-national tax avoidance.

The UK’s decision to exit the European Union had thrown up an uncertainty challenge.

“We will need to re-negotiate trade deals in Europe,” he said.

Trade deals were the key to Australia’s future prosperity, he said.

Only calm leadership with steady hands could steer Australia through any economic shocks which could come from the fallout of the U.K.’s withdrawal from the EU.

In the company of former Prime Ministers John Howard and Tony Abbott, Mr Turnbull acknowledged his predecessors. “John and Tony we salute you.”

A significant part of his speech was a direct personal attack on the character of Mr Shorten, the Medicare scare campaign, Mr Shorten’s alleged capture by his trade union backers, the exposure of practices which left his own union members disadvantaged in some enterprise agreements.

His news conferences are often four-question events with accompanying press gallery journalists not invited or able to ask follow up questions.

Mr Turnbull, according to journalists, often simply flicks questions which are not on that day’s talking points agenda.

With Brexit likely to dominate the final week, the Coalition is seen to be at an advantage if marginal seats’ undecided voters are unsettled by the bad news, falling pound and equity markets where trillions in value have been wiped off.

Other breaking news on Sunday was Labor’s release of its budget costings expected to confirm that Mr Shorten’s deficit will be bigger than Mr Turnbull’s over the next four years with claims that the federal budget would be brought back to balance by 2021.

Amber Heard’s sister and friend give evidence
‘Should have been a penalty’: Boy crash-tackled by PM gives his verdict
Russian Google to file for bankruptcy
Man arrested at NSW school for bestiality
Concern about COVID-19 deaths in aged care
Oceans hotter and more acidic in 2021 as sea levels, human-induced greenhouse gases rise: WMO
Turnbull to pledge $200 million for mental health
Today's Stories