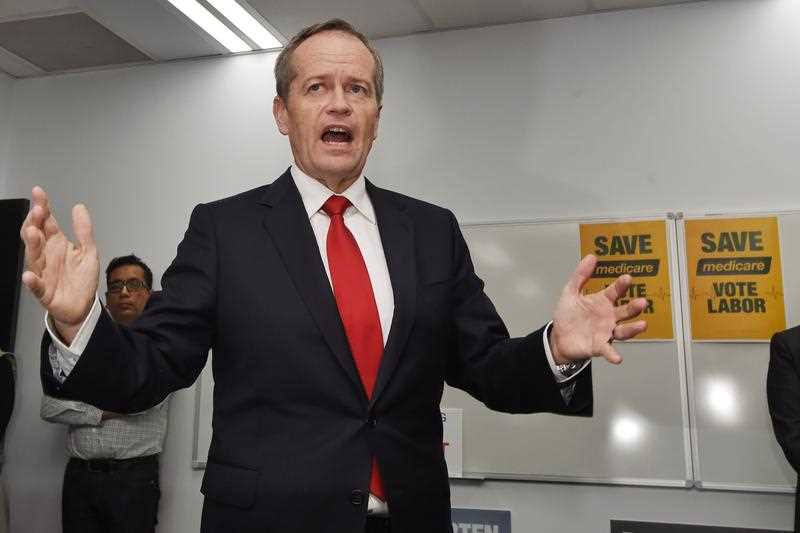 Opposition Leader Bill Shorten is continuing to warn the government plans to privatise Medicare, countering accusations of a scare campaign by claiming the Coalition’s plan is ‘scary’.

Mr Shorten told 7.30‘s Leigh Sales he would not be deterred from his campaign against the government’s healthcare policy.

“Isn’t the message that you’re sending with your hyperbole around Medicare that you don’t think that the truth alone can win you the election?” Sales asked.

“Not at all, I just think the truth of the Liberal plan is scary,” Mr Shorten replied.

Sales also asked Mr Shorten to “put your hand on your heart and look Australians in the eye” and say the Coalition has a policy to privatise Medicare.

“I can say to the people of Australia that this election and their vote on July 2 will determine the future of Medicare,” Mr Shorten replied.

He was again asked directly whether the Coalition was privatising the publicly funded healthcare system.

“We will head down the path of an Americanised healthcare system where it is how much you earn will determine the quality of your health care,” he said.

The Prime Minister has labelled Labor’s Medicare claims “the biggest lie of the campaign” and he explicitly ruled out privatising any part of Medicare on Saturday.

“Medicare will never, ever, ever be privatised. It is a core government service.”

But in the Labor launch a day later, Mr Shorten was continuing to deliver the warning.

“They’re [the Coalition] pretending their taskforce doesn’t exist and that now privatising Medicare isn’t part of their plans,” he told supporters in Penrith.

On Wednesday, Deputy Opposition Leader Tanya Plibersek appeared to be winding back Labor’s claims about the government’s intentions.

She acknowledged Malcolm Turnbull’s denials of any privatisation plans.

“Malcolm Turnbull may have denied the plans to privatise the record-keeping functions of Medicare, but he won’t deny he wants a user-pays system for Medicare,” she said.

In the 7.30 interview Mr Shorten points to a number of arguments to support his continued concerns.

“I’ve said that they [the Coalition] had plans to privatise the payments system and those plans do exist,” he said.

“I’ve said that they’ve set up a Productivity Commission investigation to look at the outsourcing and privatisation of human services.”

He also pointed to the potential privatisation of Australian Hearing Services, the increased cost of some medicines and the Coalition policy to reduce bulk billing for diagnostics and pathology as other examples to support his position.

“When you add all of that together, I say you can trust Labor to defend Medicare, you just can’t trust Mr Turnbull and his Liberal team to run Medicare in the best interest of all Australians.”