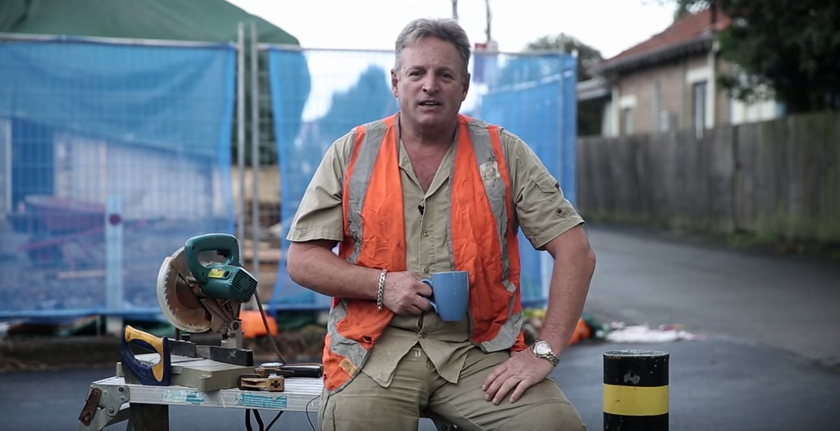 A Liberal Party election advertisement featuring a man on a worksite dressed as a tradesman has become the talk of social media for all the wrong reasons, with the public ridiculing its protagonist as a “Fake Tradie”.

Released on Sunday, the new ad’s tradesman urges viewers to “stick with the current mob”.

The only problem was that the viewers didn’t believe the tradie was a tradie at all, prompting a #FakeTradie online trend.

• The dress that has divided the golf world
• Chloe interviews Bill: the campaign gets weirder
• The zinger that won the debate for Bill Shorten
• Man tries to kill Donald Trump

“Bill Shorten even wants to go to war with someone like me, who wants to get ahead with an investment property. Well, I’ll tell you what happens when you get a war going on the economy – people like me lose their jobs.

“So I reckon we should just see it through and stick with the current mob for a while.”

Shortly after the ad was released, hundreds of social media users questioned whether the man in the ad was a genuine tradesman, highlighting his silver chain, flashy watch and clearly staged background as proof he was fake.

People also pointed out that in the ad’s credits it listed the tradie as “A. MacRae”. It was quickly uncovered there is a voice actor by the name of “Andrew MacRae”, but he later took to Twitter to deny he was in the ad:

Dear all,
It’s not me. I’m not in the ad. I didn’t voice the ad. I had nothing to do with the ad.#faketradie

Later on Monday, a Liberal Party spokesman disputed the criticisms of the “#FakeTradie” movement, telling the ABC “the tradie is real”.

“We are very pleased that people are talking about this ad, which highlights the risks of Bill Shorten’s war on business,” the spokesman told the ABC.

“The tradie is real, unlike Mr Shorten’s claims about Medicare.”

Watch the ad below:

Reaction to the ad was scathing:

Time for Australia to vote: who was more believable? Doggy Depp vs #faketradie pic.twitter.com/QKq3YIgDNo

Also, why is his saw-stool set up in a lane outside the fencing? And who has a ceramic cup on a building site? pic.twitter.com/pZEs7TPk0T

An unconventional attempt by Bill Shorten to show off his human side also backfired, with a short video featuring the Opposition Leader being interviewed by his wife Chloe failing to inspire viewers.

While Mr Shorten’s wife has been beside him for much of the election campaign, she took on greater prominence on Saturday when Labor released the video of her interviewing her husband.

In the three-minute video Mrs Shorten asked Mr Shorten questions about campaigning in community halls, what he likes to do on the weekend and even one about his time in the Army Reserves.

“Clementine, as you know, our youngest, has got the genetic DNA of a rooster, so she gets up when the sun rises,” Mr Shorten revealed.

“Then we’ve got kids’ sport, which means I am a volunteer bus driver.

Like the Liberal Party’s ad, the Mr and Mrs Shorten interview was widely panned for being unusual, slightly awkward and bizarre given she would have known all those things about her husband anyhow.

Peter Dutton touted as next Liberal leader as he claimed victory in Dickson
‘The urgency of the situation’: WHO steps in as monkeypox cases erupt around the world
Volodymyr Zelensky: How war will end as Ukraine ‘breaks backbone’ of Russian army
Jim Chalmers decries Coalition waste as Labor hits the hustings amid downpours in Queensland
Anthony Albanese, Scott Morrison cast their votes in Sydney
Australian aces at French Open out to show there’s life after Ash Barty
Labor pledge $81 million for mental health
Today's Stories