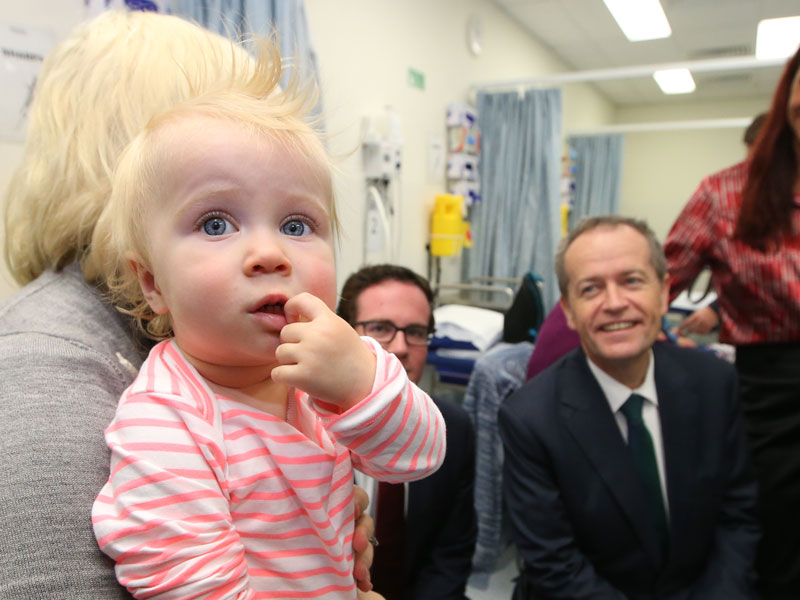 The latest round of opinion polls confirms the stalemate of this election. Six weeks of gruelling campaigning has failed to break the logjam. The persistent 50-50 two-party preferred demonstrate neither Malcolm Turnbull nor Bill Shorten have been able to establish a clear ascendancy for their parties.

It is remarkable because it shows an extraordinary fall from grace for Mr Turnbull and an unexpected competitiveness from Mr Shorten.

Most pundits still think the Prime Minister will survive. He can live with voter disappointment as long as it doesn’t translate into a greater desertion of the Coalition.

• Chloe interviews Bill: the campaign gets weirder
• The zinger that won the debate for Bill Shorten
• Waleed Aly to Turnbull: ‘You can’t fob me off’

We have seen the most extraordinary small target campaign from the Coalition. Mr Turnbull has gone out of his way to be the ‘Scarlet Pimpernel’, as Bill Shorten calls him.

He was unwilling to debate the Opposition Leader in prime time on major media beyond the first encounter and keeps long-form interviews on radio or TV few and far between.

But the Liberals appear to be working on the proposition that governments lose elections rather than oppositions win them. They have stayed disciplined. Tony Abbott has proven no Kevin Rudd in that regard.

The government has deliberately kept its “jobs and growth” mantra as vague as possible to give itself maximum wriggle room after an election win.

There have been no exciting new promises.

This has allowed Mr Shorten to slowly but surely build his profile and fill the vacuum that has been left on policy and even vision. But the Labor leader knows he needs something to break the logjam if he is to convert his very good chance of winning into an actual victory.

On Sunday, he went for the stick of dynamite.

“I can give you the answer of why politics matters in one word: Medicare,” he proclaimed at Labor’s official campaign launch in Sydney.

“Friends, this election is a referendum on the future of Medicare.”

After weeks of the government keeping the argument focussed on the economy it has suddenly been blasted onto Labor’s turf of health.

What has particularly rankled Mr Turnbull is Mr Shorten’s claim that the Liberals have a “brick by brick” agenda to dismantle Medicare. To privatise it. To sell it off and, wait for it, to flog it to an overseas buyer.

“This is the biggest lie of the campaign,” was Mr Turnbull’s hoarse response. Just as Mr Shorten is going for the doctor on Medicare, the Prime Minister is in need of one literally. He has contracted a heavy dose of the flu.

But whether the PM’s illness is a metaphor for the government’s malaise will play out in the remaining two weeks of the campaign.

Labor’s all-out assault on the government over Medicare is no desperate, last-minute lunge. It has been carefully planned for months based on research picking up voters’ concerns over the affordability and availability of their health care.

Their fears fed by Mr Abbott’s brazen breaking of his “no cuts to health” in the 2014 budget. More than that, he and his Treasurer Joe Hockey set about dismantling the Gillard government’s hospital agreement with the states.

There’s no doubt Labor is running a scare campaign, as the government cries, but Mr Shorten is unapologetic. He says it’s because Mr Turnbull’s policies are scary.

And it’s not just the spectre of “privatisation” now vehemently denied with a “never ever” from Mr Turnbull that is resonating, but the enduring 2014 freeze to doctors’ rebates and pathologists’ bulk billing payments. As well as dearer medicines on the PBS.

At stake is not Medicare as such but the sort of Medicare a government is prepared to fund. Mr Shorten is on much stronger ground here.

The Liberals know it. That is why rather than defend their outsourcing of the payments system to private companies as a way of saving millions to boost Medicare, in a panic they have dumped it. And that after allocating half a million dollars to progress the plan.

It is a sure sign of their vulnerability and a concession of their electoral weakness so late in the campaign.

Shorten goes for the jugular over Medicare