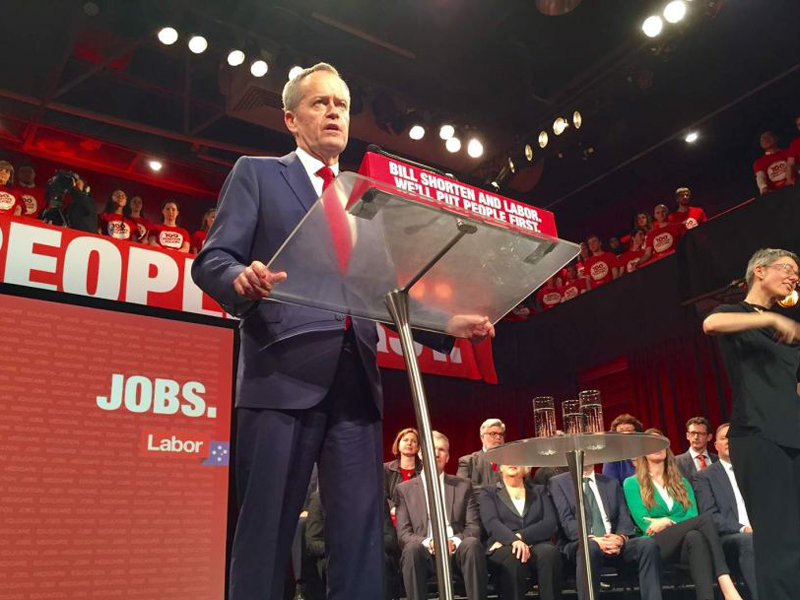 Opposition Leader Bill Shorten has delivered an impassioned rallying cry to supporters and undecided voters, saying the Prime Minister thinks he has got the election “in the bag” but Labor will ramp up its campaign and dig deeper ahead of polling day.

Mr Shorten arrived to a heroes’ welcome at the Labor campaign launch in Penrith, with former ALP prime ministers Paul Keating, Bob Hawke and Julia Gillard cheering him on from the front row and members of his frontbench behind him on stage.

The Labor leader made a new announcement on jobs and doubled down on claims the government intends to privatise Medicare.

He declared Labor “ready to serve, ready to lead, ready for government”.

“Mr Turnbull says he’s got this in the bag, he claims he’s already won it – I say to him never underestimate Labor – you ain’t seen anything yet.”

Mr Shorten said there was always someone willing to “write Labor off” and this was the moment for supporters to “dig a little deeper, work a little harder, be part of something bigger”.

The ALP launch has also confirmed the Labor leader will continue to claim the government is planning to privatise Medicare, despite the Prime Minister emphatically ruling that out.

Mr Shorten has pointed to an issues paper from the Productivity Commission, released this month, focused on “reform” in the Department of Human Services.

He said the document showed the Prime Minister had a “secret plan” to privatise services within Medicare and beyond.

Labor is highlighting the terms of reference, specified by the Treasurer Scott Morrison in April, which state the inquiry will consider “private sector providers and overseas examples like the United States”.

The commission is not due to report until after the election.

“Piece by piece, brick by brick, the Liberals want to tear Medicare down.”

The $20,000 tax concession has been interpreted as a counter offer to the government’s plans to drop tax rates for small businesses, and would cost the budget $257 million.

“Supporting these Australians into work will create around 30,000 new jobs every year,” he said.

He went on to heap criticism on the Coalition’s policy to reduce the corporate tax rate over the next decade.

“This is not a plan for the Australian economy, it is foreign aid for big multinationals.”

Labor made the strategic decision to launch the campaign in Western Sydney, an area crucial to Labor’s electoral fortunes and where recent polling suggests the Coalition maintains the upper hand in key marginal seats.

Former prime minister Kevin Rudd was not present, with Labor minders confirming he is in Russia for an international economic conference.

Mr Shorten also praised the former Labor prime minister he helped depose, Julia Gillard as she sat in the audience.

“We are joined today by a trail-blazer for women and girls, a fierce warrior for education, and a continuing inspiration to everyone who fights for Labor,” he said.

Labor frontbenchers David Feeney and Amanda Rishworth were not present for the launch.

Turnbull ‘ain’t seen anything yet’: Shorten