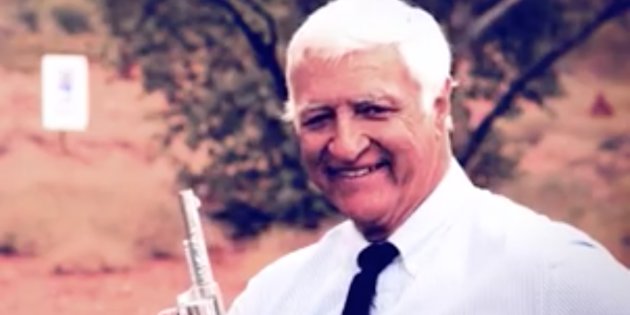 Minutes after defending his controversial “smoking gun” election ad in a media conference, Bob Katter sang about guns with a busker, declaring “we are not bending the knee to the politically correct brigade”.

The Federal MP for Kennedy crossed Cairns Esplanade into the path of a legendary local busker, Ian “Johno” Johnson, who began singing the Johnny Cash hit Don’t Take Your Guns to Town.

The 1958 single tells the story of a young cowboy who dies in a gunfight at a saloon.

• EgyptAir wreckage found: authorities
• Body of toddler taken by alligator has been found
• Wet and wild weekend a sign of worse to come

As Johno sang the lyrics, “Don’t take your guns to town son, leave your guns at home Bill,” a delighted Mr Katter slapped his thighs and sang along.

He then joined Mr Johnson behind the microphone to bust out a rendition of Creedence Clearwater Revival’s Bad Moon Rising.

Locals clapped along and lined up for selfies with the long-serving MP, seemingly unperturbed by the outraged reactions to the ad.

Mr Katter is later seen with a smoking gun and the two people lying on the ground behind him.

Mr Katter was asked to resign by Queensland LNP Senator Barry O’Sullivan over the video, while Prime Minister Malcolm Turnbull called for it to be taken down.

The joke is on me: Katter

Mr Katter remained unrepentant, saying he would do it all again.

“We only had 80,000 hits until this started blowing up so I suppose I should really thank the politically correct brigade,” he said.

“It’s now reached millions of people, we’re not backing off, we’re not going to be intimidated and stop having fun in this country and having jokes.

“As Australians it is our right to have fun and have jokes and laugh, in this case a bit at our ourselves.

“We are not bending the knee to the politically correct brigade now or in the future, and you can bash me up as much as you like, but I’m not going to bend the knee.”