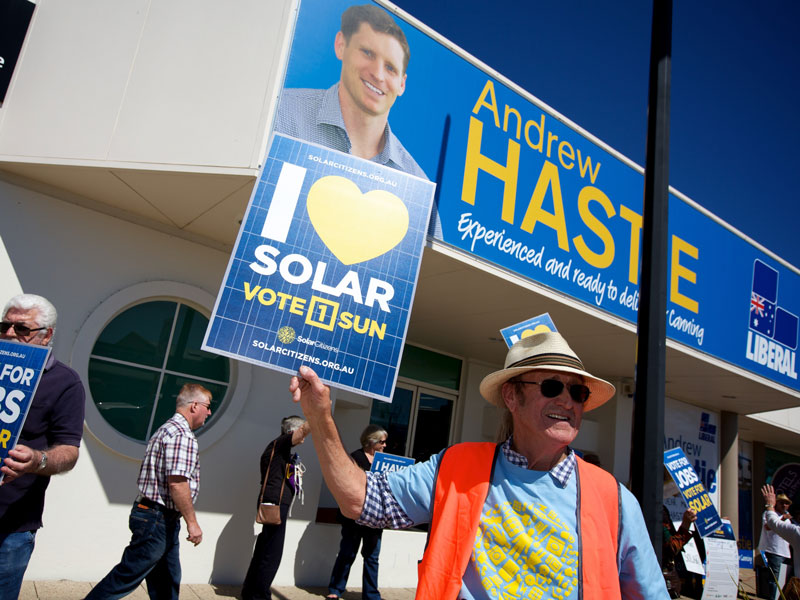 Federal Liberal MP Andrew Hastie has been dumped from the Army Reserve after he refused to remove photos of himself in his uniform from campaign material.

The former SAS officer won the West Australian seat of Canning in a by-election in September, however he did not seek Australian Defence Force endorsement for advertising material.

In a statement, a Defence spokesperson said their policy was designed to ensure the Australian Defence Force (ADF) remained apolitical.

“As a condition of their service, regular and reserve members of the Australian Defence Force are obliged to comply with various Defence instructions and policies,” the spokesperson said.

“ADF members are therefore not permitted to participate in any political activity in uniform, unless they are pre-approved to do so by an appropriate authority.

“Defence contacted Mr Hastie, a member of the standby Army Reserve, and requested he remove imagery of himself in uniform from election campaign material. Regrettably, Mr Hastie did not comply with this request.

“Accordingly, the Army issued Mr Hastie with a notice indicating the intention to terminate his service because he had failed to comply with directions and Defence policy. Mr Hastie’s service has since been terminated.”

Cormann says Hastie should be able to wear uniform

Coalition frontbencher Mathias Cormann said Mr Hastie should be able to put forward his career in the Army in election campaigning.

“Andrew Hastie has made the right decision, in my view. I support him 100 per cent in the judgments he has made,” he said.

“Obviously the decisions the Defence Force have made are a matter for them.”

“He is presenting himself at this election, obviously as re-election as the member for Canning,” he said.

Mr Hastie told Fairfax Media that because he is no longer in the military, the use of the photo should not be an issue.

“The main issue here is authority and I’m no longer under the authority of the military,” he said.

“I could not run for Parliament under section 44 of the constitution if I was still serving in the defence force, so it’s a very tenuous link they’re making.”

He said he would not stop using the image.

“I made a judgment that reflecting my personal and professional history through a single photograph on a billboard … I think that represents who I am,” he said.

“It’s tasteful and it’s in good judgment and the feedback I’ve had from constituents has been positive so it remains in place.”

“It’s a reciprocal convention, just as we expect our military to be non-political, political parties are not expected to politicise the defence force.”

In May, Labor’s candidate for the federal electorate of Brisbane Pat O’Neill, was also asked by the ADF to remove billboards of him dressed in military uniform.