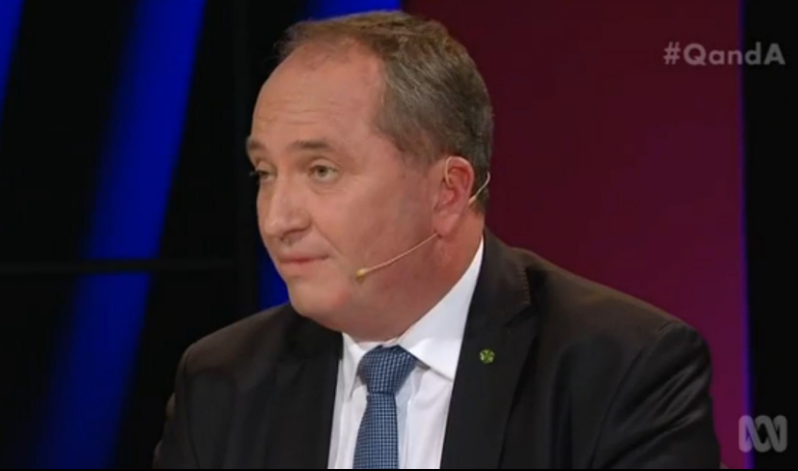 Deputy Prime Minister Barnaby Joyce has been ridiculed by residents in his rural electorate for supporting a National Broadband Network (NBN) that is “the telecommunications equivalent of the third world”.

On Monday night’s ABC Q&A program, live from Tamworth in the New South Wales electorate of New England, audience member Elisabeth Wakeford said her family struggled to access email at their home that’s only 20 kilometres from the city centre.

On top of her NBN concerns, Ms Wakeford added: “We don’t get TV reception, we don’t have mobile reception, we have a damaged fixed line that we can’t use.”

She called on the government to commit to a ‘proper’ broadband network.

“It seems to be just short-term solutions, ad hoc solutions, and I would really like us to be able to commit properly to a fibre to the premises comprehensive NBN. I think that would benefit everybody,” she said.

Mr Joyce, Agriculture Minister and leader of the National Party, told Ms Wakeford the demand did not exist for the internet speed that a fibre optic cable to the home system, instead of to nodes, would deliver.

“The problem we have got is we haven’t – the NBN has not sold one of those [faster NBN] services, not one,” Mr Joyce said.

“In fact, for those wanting over 100 gigabytes to domestic [homes], it’s the 25 megabit service that has 52 per cent of sales for where the NBN is available.

Isn’t it time to invest in our future and fund a comprehensive Fibre to the Premises NBN? @fitzhunter answers #QandA https://t.co/IpvHTAy9F2

“We have to make sure it meets the mark market. That’s how it works.”

Independent candidate for New England Tony Windsor, who held the seat between 2001 and 2013, was adamant that Labor’s NBN plan was the way to go: “Do it once, do it right, and do it with fibre.”

He said rural internet was being let down by politics.

“This is the infrastructure of this century,” Mr Windsor said.

“It isn’t about cost, it never has been about cost. It has always been about politics, because one side decided to go for the top standard, the other side had to oppose it. That’s one of the great tragedies of this.”

“Digital technology opens up the scope for people who are remote, for whom the tyranny of distance is an inhibitor, whether it’s health, education, whether it’s a business and just because you are remote, Barnaby, you still need more than 25 gigs,” Ms Simon said.

“We are already one of the most urbanised countries in the world,” he said. “If we don’t deliver services, whether they are telecommunications, health or education services, we’ll all be living in the capital cities and that would be a disaster for all sorts of obvious reasons.”