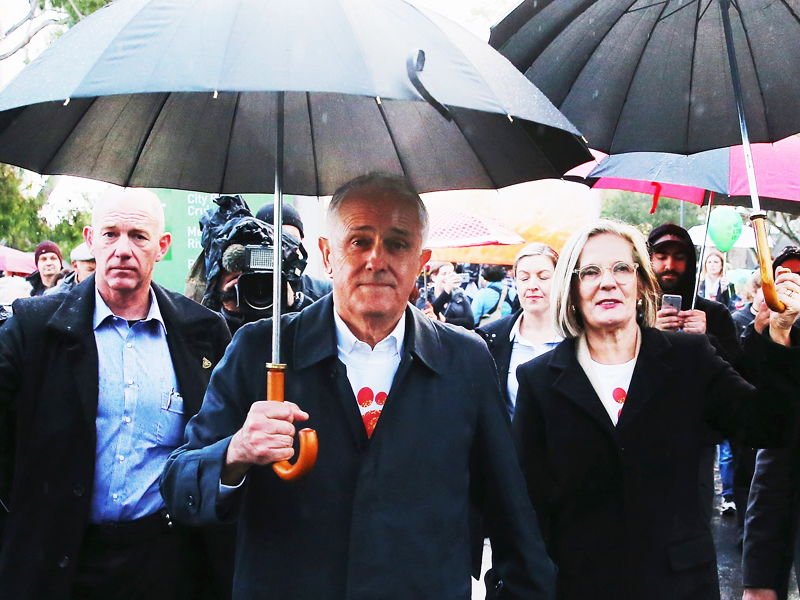 Both major party leaders suffered blows to their popularity in Newspoll. Labor lost its recent one-point lead, with it and the Coalition drawn at 50-50 in the two-party preferred stakes, as reported by The Australian on Sunday night.

Voter satisfaction with the performance of Mr Turnbull fell one point to 37 per cent, and with Labor leader Bill Shorten four points to 33 per cent. Both men also lost one point from their better prime minister rating.

Another influential poll published on Friday also suggested that many voters are no longer mesmerised by Mr Turnbull’s seductive charms.

But the government remains confident it can hold on by strong local campaigns in the marginals, particularly in Queensland, through direct appeals to voters not to be punitive.

Where once Mr Turnbull’s net approval rating had hit stratospheric heights after he deposed Tony Abbott, it is now dropping rapidly.

And in a cheeky poll commissioned by his Labor rival in his Sydney seat of Wentworth, Mr Turnbull is reported to be sinking after solid primary vote increases over the last three elections – from 68-32 two-party preferred in 2013 to 58-42 in this campaign.

The poll showed 56 per cent of the locals had changed their once-favourable opinions of Mr Turnbull since he assumed the leadership.

As the disastrous polls brought more speculation about a hung parliament involving House of Representatives independents and Greens, Mr Turnbull is now playing the stability card.

“A vote for anyone other than my Coalition team is a vote for chaos. Every single vote for Nick Xenophon, the Independents, the Greens or Labor, brings us closer to Bill Shorten and the Greens running Australia. So now is not the time for a protest vote or a wasted vote.”

For his part, Labor leader Bill Shorten rolled out another policy: promising to lift childcare rebates for working families.

Labor’s “putting people first” now seems to be the more effective campaign slogan when compared to “jobs and growth”.