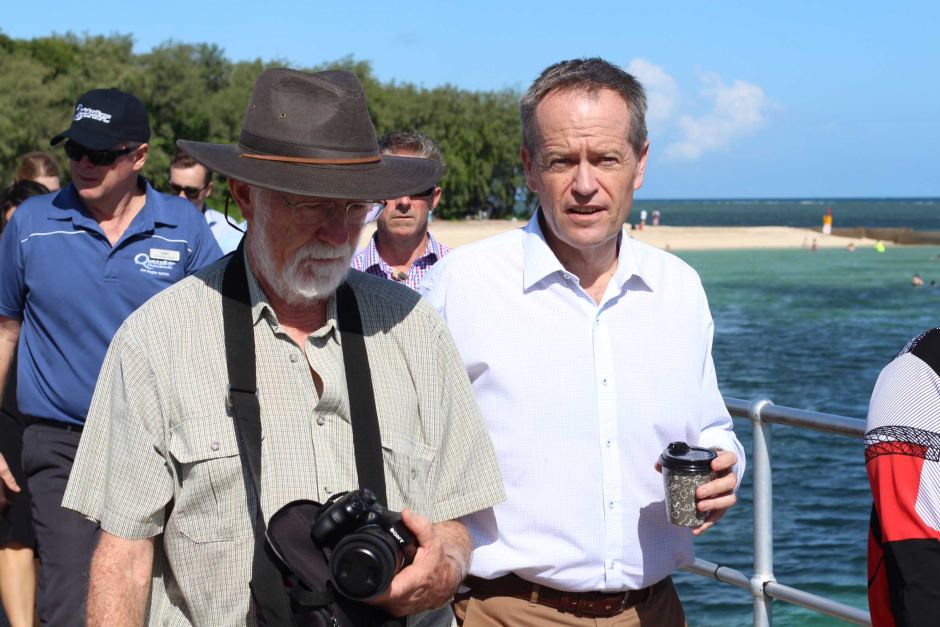 “The reef is in peril,” the Labor leader said during a visit to Cairns, as surveys revealed 35 per cent of coral in central and northern parts of the reef has died.

The surveys, carried out by the ARC Centre of Excellence for Coral Reef Studies on reefs from Townsville north to Papua New Guinea, showed bleaching associated with high water temperatures has killed up to half of all corals in some areas north of Cairns.

• Rent-to-buy house deals can lead to disaster
• Pollies fiddle with numbers but ignore elephant in room
• Turnbull, Shorten face off in leaders’ debate

“This reef needs our protection and it needs it now.”

Labor would spend $100 million on research by the CSIRO, universities and other institutes, $300 million on environmental programs to reduce nitrogen and sediment run-off and up to $100 million on better management of the reef.

“Stakeholder after stakeholder, the Queensland Auditor General, and most recently the Water Science Taskforce have called for much greater coordination of the different bodies that have an impact, and the different programs that are seeking to restore the health of the Great Barrier Reef,” shadow environment minister Mark Butler said.

But Environment Minister Greg Hunt has questioned whether that funding is worthwhile.

“How they can justify $100 million on more bureaucracy without even outlining or explaining where that will be spent is an extraordinary diversion of funds for the reef,” Mr Hunt told ABC’s The World Today.

Both parties are promising to increase efforts to curb outbreaks of the destructive crown-of-thorns starfish.

Labor would fund an additional two control vessels, while the Government is promising to spend $6 million from its $210 million Reef Trust on one additional vessel.

“I think you’ll find that we’ll have considerably more to say on the reef,” Mr Hunt said.

In the federal budget, the Government promised an additional $171 million over six years for the Great Barrier Reef through its Reef 2050 Plan and the Reef Trust.

Labor would reprioritise five years’ worth of that funding, which is $123 million, to help make up its total $500 million fund.

Mr Hunt said the Opposition must explain what it intends to do with the budget allocation.

“Which programs will they be cutting? I think it’s extremely important that they are upfront,” he told The World Today.

But Labor said it was committed to the long-term strategy developed in response to recommendations from the UNESCO World Heritage Committee, and to targets to reduce nitrogen run-off by 80 per cent and sediment run-off by 50 per cent by 2025.

“What we’re really talking about now is how we get to those targets, how we achieve the sort of reduction or improvement in water quality that one of the seven natural wonders of the world requires for its long-term health.”

The Federal Government said since it was elected in 2013, it had provided a total of $460 million in funding for the reef through a variety of programs.

“These are reductions of sediment and nitrogen and pesticides from on farm activities, so to reduce the impact on our waterways, to improve water quality,” Mr Hunt said.

“Real work, recognised by the World Heritage Committee, as Australia being the global role model — whereas only a couple of years ago they were looking at declaring under Labor and the Greens, the reef in danger,” Mr Hunt said.

“What we have just done, through the Emissions Reduction Fund, is allocate $150 million to reef catchments, and a further $50 million to catchments further down the Queensland coast.

“This has a direct, immediate, profound impact on water quality.”

The World Heritage Committee decided against listing the Great Barrier Reef as “in danger” last year, but said it would be monitoring the situation over the next four years.

Last month, the Greens released a seven-point plan to “revitalise” the Great Barrier Reef, including a $1 billion fund to help coal workers exit the industry.

“The scientists are saying that global warming is the biggest threat to the reef and that 93 per cent of the reef has just experienced bleaching,” Greens Senator Larissa Waters said.

“What more is it going to take before the Labor and Liberal parties realise that we can not take any new coal or we will lose the Great Barrier Reef?”