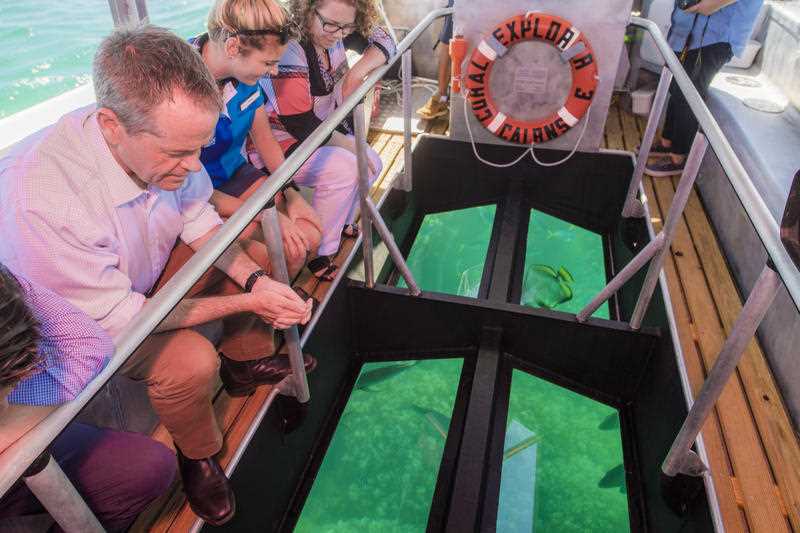 While the move could earn Mr Shorten some votes, neither federal Labor nor the Queensland Labor state government, led by Annastacia Palaszczuk, have committed to stopping one allegedly destructive impact: the $21 billion Carmichael export coal mine.

In fact, inspired by its job generating and royalty revenue potential, the Premier in April announced her government had approved the necessary mining leases for the India developer, Adani.

The approvals were denounced by climate change activists.

On Monday in Cairns, Mr Shorten pledged $377 million to add to the already approved Turnbull government’s $123 million to improve water quality along the Great Barrier Reef.

Around $50 million of the Shorten money will go to the CSIRO to focus on reef-relevant climate change research.

The reef, the world’s largest coral ecosystem, is already a significant export earner for Australia, estimated to be worth $6 billion a year and sustaining 70,000 jobs.

The Queensland government says its environmental protections for the Carmichael mines will be the toughest in the world.

But scepticism about this and Labor and Coalition hand-on-heart commitments to the reef have grown following the federal Environment Department’s recent intervention to prevent the reef being listed in a UN agency report detailing the risks of climate change on world heritage sites. The UN World Heritage Committee is currently monitoring the reef’s health to see if it should be listed on its ‘in danger’ list.

An intriguing analysis of Newspoll voting trends over the past two months concludes the Coalition could lose government on July 2.

But this does not accord with a widespread voter perception that the Turnbull government will be returned with a reduced majority. The Coalition’s incumbent marginal seat MPs report that at this stage of the campaign, with 33 days to go, their constituent support is holding. There is no reported sentiment to take a baseball bat to the government.

But the Newspoll analysis, published in The Australian, indicates a significant slump in key states could cost the Coalition 10 seats in New South Wales, six in Queensland and three in Western Australia. If confirmed on election day, that would be a loss of 19 seats.

On that outcome the government would be returned with a few seats to spare. (After the recent redistribution, notionally the Coalition has a 21-seat House of Representatives buffer.)

According to Newspoll, the Coalition has suffered a 6 per cent swing against it in Queensland, 7.3 per cent in WA and 3.6 per cent in NSW.

More specific marginal seat polling is required to test and define the accuracy of these state-wide trends.

In inner and western Sydney, the Westconnex toll road network is a major issue with differences emerging on Monday between Labor deputy leader Anthony Albanese (Grayndler) and Mr Shorten.

So concerned is Mr Albanese about losing his seat to the Greens in a preference pincer, he is reported by The Daily Telegraph to have declared: “If I am the transport minister there will be not one dollar from the federal Labor government for this Westconnex project.”

Under questioning at a news conference, Mr Shorten had to confirm that if elected no Westconnex contract would be repudiated. With Westconnex construction well underway with funding from both the federal and state governments, it appears the $16 billion toll road will be completed, if necessary, over Albo’s ‘dead’ political body.

Labor pledges to save Reef, as poll suggests Coalition strife