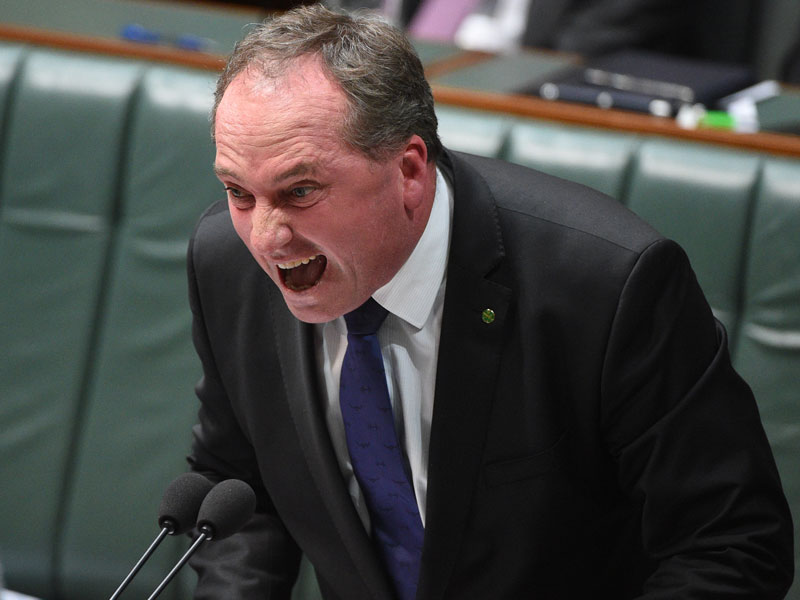 Barnaby Joyce had delivered a clear message to those house hunting, move to the bush if you can't afford the city. Photo: AAP

The battle between Johnny Depp and Australia’s Deputy Prime Minister has re-ignited, with the Hollywood star saying Barnaby Joyce looks like he was “inbred with a tomato” and the minister declaring he is Depp’s “Hannibal Lecter”.

Depp, appearing on US talk show Jimmy Kimmel Live, was quizzed about the legal case which saw him and his wife Amber Heard plead guilty to illegally bringing their pet dogs into Australia in 2015.

“He looks somehow, like, inbred with a tomato,” Depp said of Mr Joyce, who he called “Barnaby Jones”.

“It’s not a criticism. I was a little worried.

It didn’t take long for Mr Joyce to respond, laughing off the insult at a press conference on Wednesday morning.

“I think I’m turning into Johnny Depp’s Hannibal Lecter, aren’t I?” he said.

Mr Joyce was also asked which vegetable he’d rather be compared to.

“Something sleek and sensitive, just like me,” he said.

The Pirates of the Caribbean star did not reveal who scripted the video, saying it was put together by “an absolute genius”.

“These are the things you have to prepare a long time for and you know, to be able to tap into the emotion that you need,” Depp said dryly.

He mocked the government’s choice to threaten to euthanase the miniature dogs “because there’s so many poisonous creatures in Australia, you could die at any minute”.

“I think the choice they made to utilise the taxpayers’ dollars to globally chase down a couple of teacup yorkies and give them 50 hours to live … I realised the badness of my ways so I was kind of repenting,” Depp said.