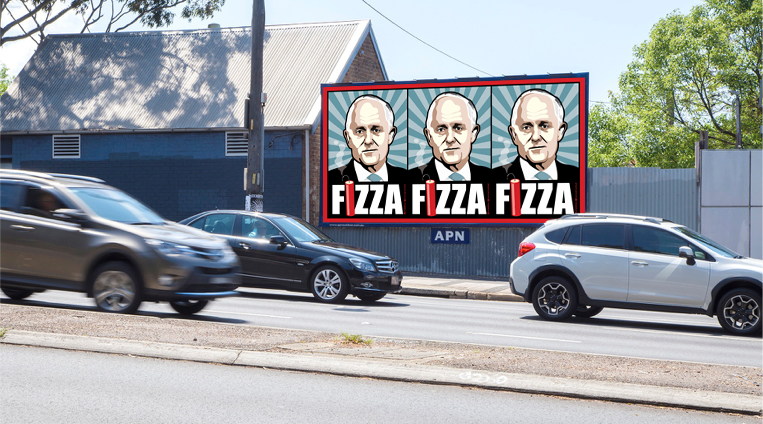 The Australian Electoral Commission won’t reveal who dobbed in an “illegal and unauthorised” poster which lampoons Prime Minister Malcolm Turnbull as a ‘fizza’.

The creator of the poster, graphic designer Michael Agzarian, told The New Daily he had been contacted by the AEC and told to rework his poster – which features an illustration of Mr Turnbull with the word “Fizza” emblazoned across it – or face penalties under electoral laws.

The New Daily asked the Prime Minister’s office if it had contacted the AEC about the posters. A spokesperson did not answer the question directly, saying in a written statement: “The Liberal Party always authorises all of its election materials, and expects that others would do the same.”

Mr Agzarian said he “got a phone call from [the AEC] last week saying what I was doing was illegal and I have to put a disclaimer on it”. He has since organised for all of his posters to feature his full name and address.

The artist was also responsible for the Tony Abbott ‘Hopeless’ posters in 2015, but said he wasn’t aware he was doing the wrong thing, and just wants to get his 1000 posters up.

A spokesperson for the AEC said the commission did not “go hunting” for unauthorised electoral advertising but could not reveal who referred the case, while Mr Agzarian said he believed it was a “couple of top Liberal Party people”. He was unable to supply evidence for the claim, however.

For the Turnbull poster, Mr Agzarian referenced a famous sledge from former prime minister Paul Keating, who described Mr Turnbull as like “a big red bunger on cracker night” in 2007.

“You light him up, there’s a bit of a fizz but then nothing, nothing,” said Mr Keating of Mr Turnbull, who was then the environment minister.

“[Mr Turnbull] showed compassion, he was articulate … but we waited and nothing happened. As an Australian I feel let down.”

Taking time out of running Advision, the creative design agency he founded, Mr Agzarian has printed off 1000 ‘Fizza’ posters, and plans to disseminate them during the election campaign.

“We’re getting more attention now because we’ve booked a billboard in Sydney next month, and we’re in talks with some Melbourne artists to put a mural up.”

According to the AEC, an advertisement, handbill, pamphlet, poster or notice that contains electoral matter referring to political matters during an election campaign must state who authorised it.

Mr Agzarian said he’d heard the PM “didn’t like the poster very much”, but it had been well received on other sides of politics.

“I’m actually not far from Tanya Plibersek’s office in Sydney, so I dropped a bunch of posters over and she was very thankful,” he said.

He said Labor Party members had written to congratulate him on his various prints, which have been officially collected by the Australian Library and purchased by a number of galleries.

As well as “Hopeless”, Mr Agzarian’s designs have used “Heartless” (George Brandis) and “Clueless” (Joe Hockey) to describe Australian politicians, but he hoped the poster business wouldn’t be an ongoing exercise.

“I’m not for Labor, I’m not for the Greens, I just want people to be aware.”