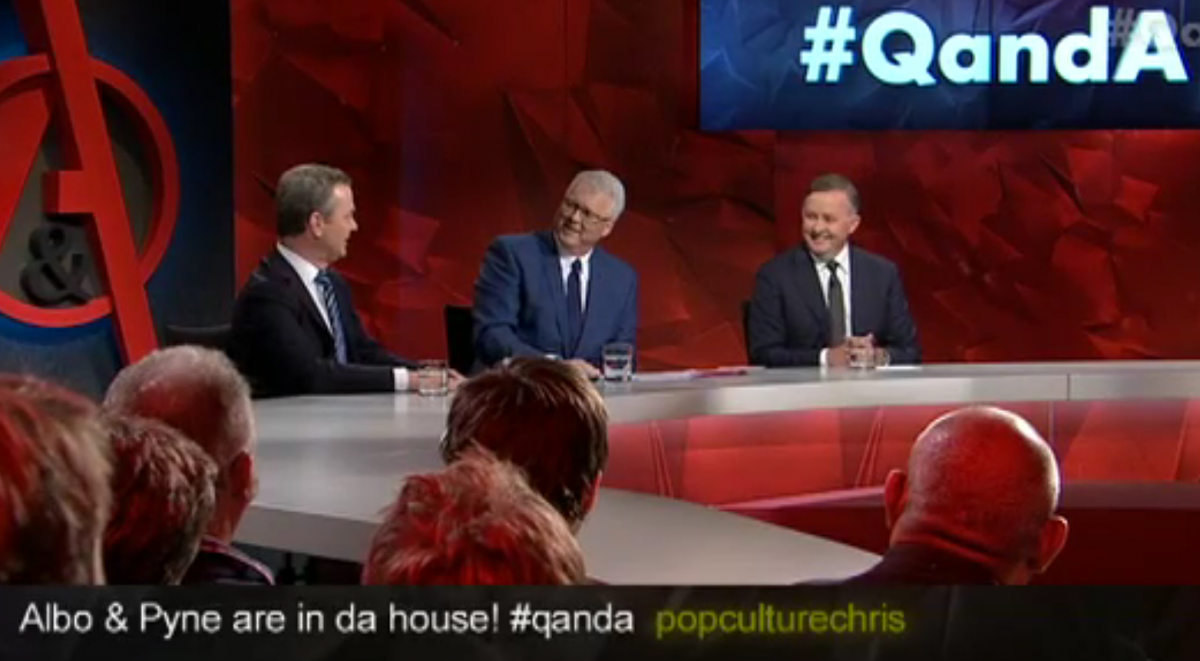 An audience member on ABC’s Q&A program has complained that the once “socially progressive” Malcolm Turnbull has become beholden to the conservative right-wing of the Coalition government.

Speaking on Monday night, Rhys Whitelock told Innovation and Science Minister Christopher Pyne he was considering not voting for the Liberal Party at the upcoming federal election because Mr Turnbull had shifted too far from his moral convictions.

Mr Pyne said he disagreed with the premise that the conservative faction of the Liberal Party was controlling Mr Turnbull.

“He’s obviously intelligent, he’s a success in his own right, and he’s brought that success into politics. I think he will continue to be Prime Minister. And he’s much more popular than Shorten in terms of the preferred prime ministership.”

Shadow Infrastructure Minister Anthony Albanese agreed with the audience member that voters were “very disappointed” in their new Prime Minister.

“Now when they look at Malcolm Turnbull, they hear Tony Abbott.”

Another audience member asked Mr Pyne if Mr Dutton’s recently controversial comments about “illiterate, innumerate refugees” were proof that the government was “out of touch”.

Mr Pyne responded: “I think Peter Dutton was much maligned, I think the press leapt all over his statement and twisted it.

“I think the truth is that he was simply responding to a call by the Greens to massively increase the refugee intake.

“Migrants have built one of the greatest countries in the world and Peter Dutton would agree with that.”

Mr Albanese slammed Mr Dutton, labelling the comments as a deliberate tactic by the Coalition to drum up fear about refugees close to an election.

But the Labor frontbencher did admit that his party got it wrong on asylum seekers when last in government.

He said he underestimated the “pull factor” from Labor’s relaxation of the previous Howard government’s tough stance on asylum seekers, which he said resulted in an influx of asylum-seeker boats and drownings at sea.

“I got it wrong. We had a position that was simply unsustainable and we could not sustain the fact that more than 1000 people were coming, risking their lives by boat to try to get to Australia towards the end of our term in office,” he said.

The two combatants also debated the Coalition’s NBN policy, which had been the subject of fierce criticism from Labor:

Does the govt regret the decision not to persist with fibre to the premises roll-out? @cpyne says no #QandA https://t.co/v34KabPxmE

Q&A: ‘I want the old Malcolm back’