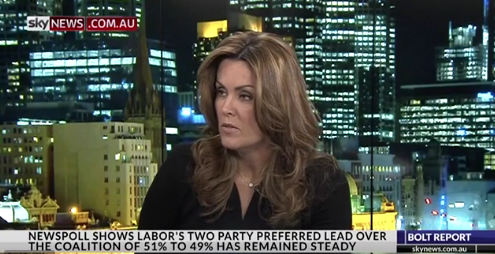 Malcolm Turnbull’s slump in the polls would hurt him because he likes to be liked, but that’s not really the main game, says former political insider Peta Credlin.

Ms Credlin, longtime chief of staff to former prime minister Tony Abbott, said there had been a significant turnaround in Mr Turnbull’s popularity.

Ms Credlin said the main game inside campaign headquarters for both sides was the level of the primary vote.

Labor’s 36 per cent support, according to the latest Newspoll, was enough to win a few seats but not the election. The Coalition’s 41 per cent was steady, although the campaign team would prefer it to be higher.

Ms Credlin said what was concerning was the high level of uncommitted voters, with a significant level of disengagement and disinterest.

She said Mr Turnbull’s decision to be interviewed by broadcaster Alan Jones on Wednesday was overdue and about time.

Liberal deputy leader Julie Bishop said in her experience campaigning in marginal seats, voters were engaged and were reacting positively to Mr Turnbull and the coalition plan.

“I’m getting very positive feedback about Malcolm and they like what they see and hear and like his leadership style,” she told ABC Television.

Ms Bishop said people’s attention span would narrow and be more focused as the election approached.

“But they’re interested in what we have to say. They like what we see in Malcolm Turnbull,” she said.