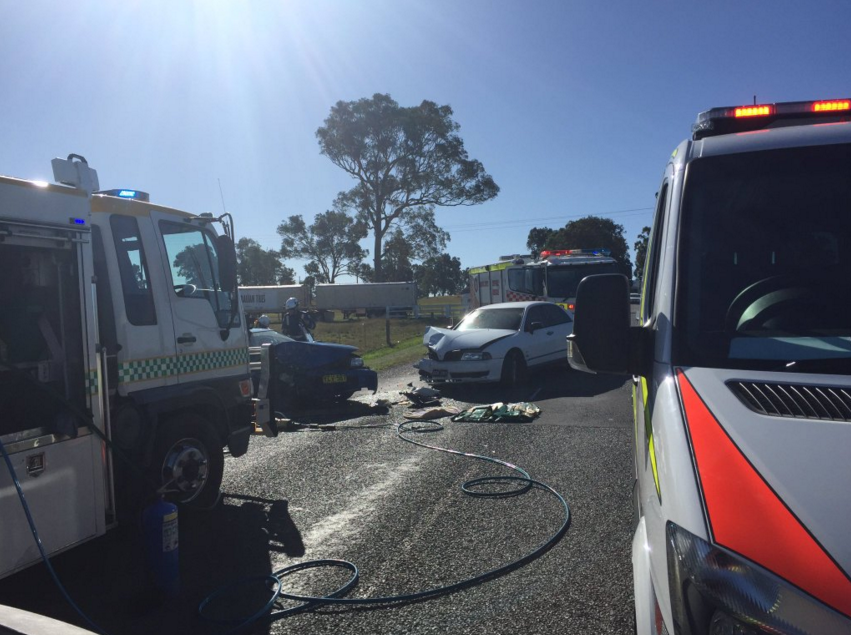 The Australian Federal Police approved Bill Shorten’s convoy pulling over on the side of a narrow road moments before a woman swerved and collided head-on with another car.

The Opposition Leader was in the Hunter Valley to talk to Cessnock mayor Bob Pynsent and Labor candidate for Paterson Meryl Swanson about problems with the notoriously dangerous stretch of Cessnock Road at Testers Hollow.

As their cars pulled over on the signal of an AFP officer standing at the side of the road on Thursday afternoon, a car overtook the convoy and collided with an oncoming car.

“It was signed off by the federal police. That was the instruction that I took,” Mr Pynsent told AAP.

“It’s a dangerous section of road but that is why we were there – to talk about it.

“We were briefed on the safety and I was quite comfortable.”

The younger woman suffered head injuries and was taken to John Hunter Hospital, where she’s in a stable condition.

The other woman and her son who were not hurt were invited into Mr Shorten’s car, where he comforted them for about half an hour.

NSW police are investigating the accident.

Mr Shorten cancelled his afternoon campaign events in Maitland but was attending an event in Sydney on Thursday night.

Mr Pynsent told AAP he followed the instructions of the AFP officer to pull over for a media conference, with Mr Shorten’s car and a police car behind him.

“Two vehicles behind us had a head on – one swerved to the other side of the road and collided with a car coming in the opposite direction,” he said.

No one in the opposition leader’s entourage was injured, he said.

Mr Pynsent says the road is a trouble spot.

“The reason we were there is it’s a problem to our local government area,” he said.

“It’s narrower than most of rest of the road and it has flooding issues.”

Ms Swanson said the main thing was no one was seriously injured.

“The lady who was involved – Bill and I have just delivered her home with her little fellow,” she told reporters.

“She has just texted me to say she’s okay.”

Asked what she thought of Mr Shorten’s response, she said: “He was just outstanding. It’s often when a person’s true character is shown in a situation like this. He was sensitive and very reassuring.”