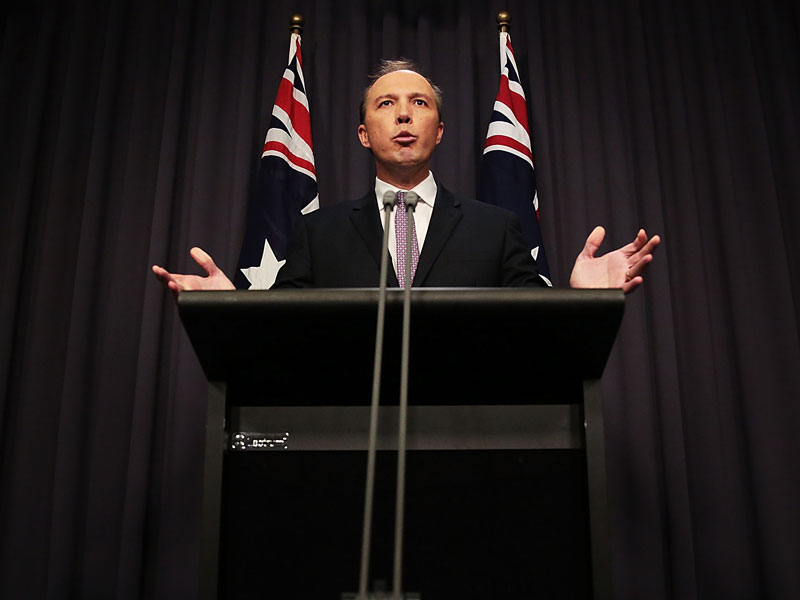 It’s only week two of an eight-week campaign and already the switch has been thrown to xenophobia.

When you can’t cajole the voters it’s best to play to their darker angels and nothing is darker than foreigners, refugees or migrants – it doesn’t matter – coming to bludge on taxpayers and take jobs.

Immigration Minister Peter Dutton was the latest politician to pull on this rein and he did it with absolutely no finesse. The most obvious conclusion is that the Liberals are very worried that they are losing the election.

But if history is any guide it could prove a winner for the government. A hard-pressed John Howard did it to great effect in 2001 and “stopping the boats” helped float Tony Abbott’s victory in 2013.

There is a lot of speculation about why Mr Dutton went in so hard. He described asylum seekers as “illiterate” in their own language, let alone English, and they can’t even count.

In an interview on Sky News, he was goaded into attacking the Greens’ policy of upping the refugee intake to 50,000. In the process he went too far.

In the case of refugees, he got carried away saying they would take jobs but many would be unemployed, they would languish on unemployment queues and “on Medicare and the rest of it”.

Never mind the contradiction or the fact Treasury and business leaders see immigration as an economic driver creating jobs rather than stealing them from true blue Aussies.

But Mr Dutton was not without context. The Prime Minister earlier in the day went to Darwin to bang the border security drum and to accuse Labor and the Greens of being a threat to it and unwilling to show the tough leadership needed.

What would surprise many is that Malcolm Turnbull, who just last year described the Pacific solution as “harsh” and sympathised with the suffering of the asylum seekers on Nauru and Manus, owned the Abbott/Morrison policy as his own.

Far from distancing himself from Mr Dutton’s fear mongering, the PM described him as “an outstanding Immigration Minister”.

It could point to a lack of faith among Liberals in the ability of Mr Turnbull’s optimism or Scott Morrison’s budget to save them.

Indeed, on Wednesday the Australian Financial Review reports JWS Research has found the budget has left voters cold and its fairness message failed. So much for Mr Turnbull’s claim to superior economic salesmanship.

Many will feel bitterly disappointed. The surge of support for the Turnbull coup and for his promise of intelligent, inclusive politics is foundering in the cauldron of political reality.

The reality is that Mr Turnbull leads a government much more conservative than him and he has been unable to rise above it.

The other reality is the underestimation of Labor’s Bill Shorten.

He has gained ground by taking risks. In response to Mr Dutton he took a big one by rejecting his play to our prejudices.

“We’re not having a bar of the low road of Mr Turnbull, Mr Dutton, Pauline Hanson or anyone else,” he said.

“You don’t attack refugees as a whole group of people and demonise them to the Australian people.”