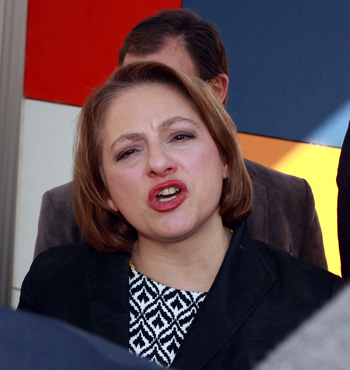 Former Liberal minister Sophie Mirabella suspects the Liberal Party campaign headquarters is behind a series of damaging leaks to journalists to undermine her as she battles to reclaim the regional seat of Indi from independent Cathy McGowan.

When asked would it surprise her if last Monday’s story in The Australian with the headline, “Mirabella: she’s cooked”, actually emanated from her own camp, the former member for Indi, who lost by just 439 votes in 2013, laughed ruefully.

“But if you show me the name of the journalist I might be able to point you in the right direction. You can usually guess it 90 per cent of the time.

“What do they say? If you want a friend in politics, get a dog.”

When 7.30 put to her the argument that her own relationships within the Liberal Party were not strong enough to make her an effective MP, Mrs Mirabella was quick to point out the distinction between party and parliamentary colleagues.

Her relationships with the latter, she claimed, were still good.

“Quite frankly, it doesn’t matter what Collins Street says,” she said.

“It matters what the people of Indi say.”

Her husband, ex-Army Lieutenant Colonel Greg Mirabella, is prepared to defend his wife, but understands the nature of politics.

“I’m a private person but I’m also the person that can say things in defence of Sophie, that Sophie can’t say for herself,” he told 7.30.

“But every political colleague is also a competitor, and is a potential enemy. It’s a reason why most people wouldn’t enjoy that political game, I think.”

Whilst telecommunication black spots, job opportunities and the now notorious Wangaratta hospital dominate as key election issues in Indi, all fall within the ambit of which electoral candidate can offer the electorate the most effective relationship with a federal government.

Mirabella: Liberal HQ leaking against me