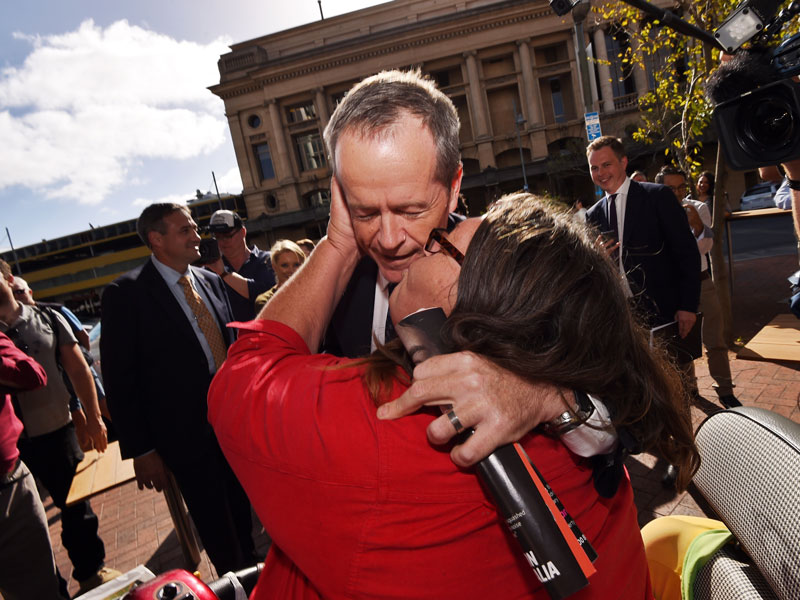 The Turnbull government has backflipped on its backpacker tax just two weeks after it was announced in the federal budget.

On day nine of the election campaign the government moved fast to extricate itself from a backlash from farmers and tourist operators and a 48,000-signature online protest.

Meanwhile, the Opposition Leader was trying to liberate himself from an amorous voter.

Bill Shorten was grabbed, almost lifted off his feet and then kissed by an Adelaide woman, much to the amusement of onlookers.

“Now come on! Give us a kiss and a cuddle for the cameras?” she said.

It was this “give us a kiss” plea from the wheelchair-bound Margo Carey where she nearly upended the Labor leader to secure an unavoidable smooch on the lips. The kiss incident dominated the primetime TV news, further humanising the trade union organiser.

A 32.5 per cent tax from the first dollar earned by backpackers permitted to work in Australia, was to have started on July 1.

At a cost of an estimated $40 million, the government has deferred the revenue measure for six months. Farmers, dependant on fruit pickers and seasonal workers to deliver their harvests, want the tax abolished.

For ordinary wage earners, tax is only paid above a $18,200 threshold. But international holidaymakers allowed to take short-term casual work effectively tax-free in Australia have become a mainstay for hospitality and agriculture. The tourism industry says the work permits attract a significant number of young people to Australia.

Campaigning in Darwin, Prime Minister Malcolm Turnbull said: “We’re listening to the concerns from the horticultural sector and hospitality sector in particular.”

Mr Shorten, in Adelaide, said the government had made a “shemozzle” of this budget measure but would not commit to its permanent abolition.

Trust the umpire on penalty rates?

Mr Shorten was on the defensive with his own constituency over the Greens’ campaign promise, publicly backed by some trade unions, to legislate to protect penalty rates.

A test case before the Fair Work Commission to constrain Sunday penalty rates will not be determined until after the election. Mr Shorten, the Prime Minister and Nationals leader Barnaby Joyce have all said the umpire’s decision should be abided by.

But the Greens’ tactic has exposed Mr Shorten to division within the trade union movement.

The proposed Greens legislation to prescribe penalty rates outside Fair Work’s jurisdiction would give a future Coalition government “the mechanism to be able to chop the independent umpire”.

In other election moves, Mr Turnbull used a visit to Border Force maritime headquarters in Darwin to attack Mr Shorten over apparent dissent within Labor over ‘stop the boats’ and offshore detention.

For 600 days there had not been a boat arrival because of the government’s toughness in intercepting and turning back the people’s smugglers at sea.

Up to 25 Labor MPs had now been identified having misgivings about the party’s commitment, including deputy Tanya Plibersek, whom Mr Turnbull said was a “crab walking away”.