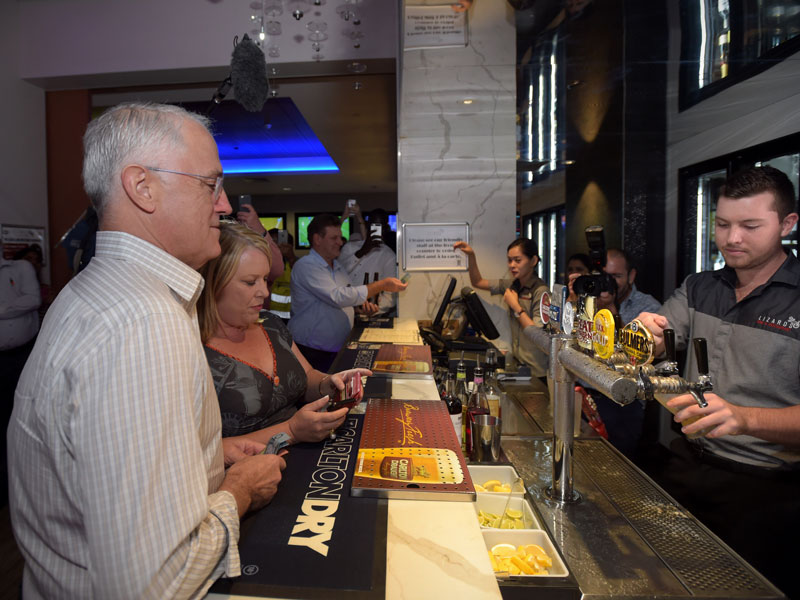 Prime Minister Malcolm Turnbull has given the strongest indication so far the government will dump the controversial backpacker tax.

Addressing a group of mostly sympathetic voters in a Darwin pub, the Lizard Bar, he said this was something the government was very alert to.

“Just watch this space,” he said.

The so-called backpacker tax is a deeply unpopular tax measure which eliminates the tax-free threshold for visitors on working holiday visas.

That mostly affects casual workers who pick fruit and work in the hospitality industry and is strongly opposed by many on the Coalition side.

The Prime Minister’s first stop in Darwin was a “politics in the pub” event – launched with an ice-cold beer paid for with a $20 note.

This wasn’t “politics in the pub” as it’s known in inner Sydney venues, lacking the tang of spilled beer and the scent of blood in the air.

Locals admitted the renovated Lizard Bar is a far more civilised venue than some in Darwin.

The TV was turned right down and there was a complete absence of heckling well-lubricated locals.

But it wasn’t wholly a love fest.

Mr Turnbull was asked about government spending on crystal methamphetamine, or ice, and what was being done in the NT.

PM faces punters in the pub