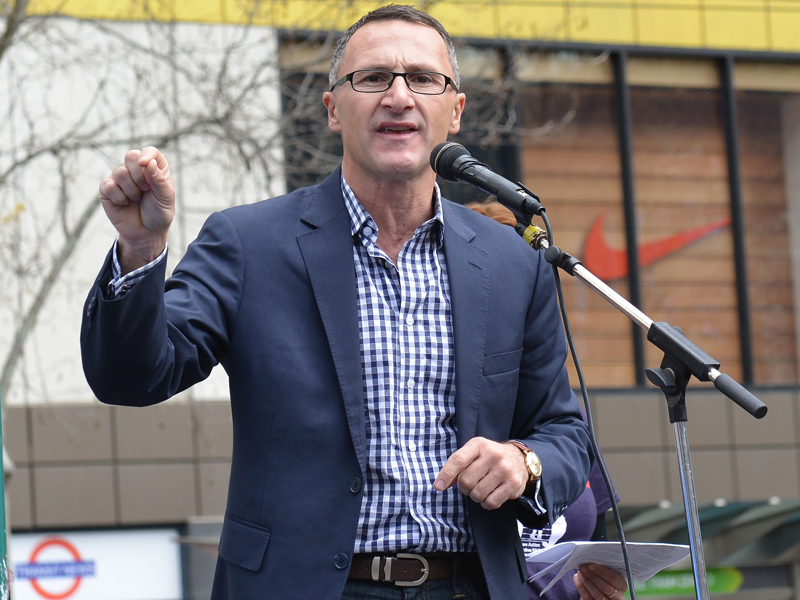 Greens leader Richard Di Natale has set himself the task of breaking Australia out of the political Labor-Coalition ‘duopoly’ which has run the country since federation.

The Greens’ latest legislated penalty rates guarantee to wedge the Labor Party is indicative of its tactical and combative cunning.

But even with news this week that atmospheric carbon dioxide measured by the Cape Grim air monitoring station in north-west Tasmania had reached 400 parts per million for the first time, and record heat through summer and autumn, there is no evidence yet of a paradigm shift to the Greens in voting intention.

While mainstream media covered the Cape Grim milestone, the Greens leader failed to mention it, or the scientifically asserted ‘grave risk’ to the Great Barrier Reef in his ABC Lateline interview last week.

While acknowledging that breaking the duopoly objective would not be achieved at the July 2 election, Senator Di Natale observed that vested interests, particularly in fossil fuel, alcohol and gambling, backed by the Murdoch Press, favoured the status quo.

“They don’t like the cosy little duopoly, the Labor and Liberal, Coles and Woolies of politics model to be broken. Well, we’re here to break it.”

While phasing out coal-fired power with rapid transition to a renewables economy is top priority for the Greens, the current ‘breakout’ strategy is to hit its main constituent rival, the Labor Party, where it hurts.

The Greens say they would legislate to protect weekend and other penalty rates, now at risk from a Fair Work Australia test case. This exploits remarks by Labor leader Bill Shorten that his party would abide by the umpire’s decision. Mr Shorten has counter-punched that the Greens’ intervention risks “loading the gun” for the Coalition to legislate to remove penalty rates.

The Greens propose a national redress scheme for the survivors of institutional child sexual abuse.

The Greens also commit to ending offshore detention for asylum seekers and closing the Nauru and Manus Island centres.

While the Greens leader insists there is no formal preference deal with the Liberal Party, he told Tony Jones he accepted that the Liberals would direct their preferences to the Greens in some seats to hurt Labor.

But there would be no formally agreed quid pro quo.

In those seats where Labor’s primary vote is less than 50 per cent, the Greens come second and the Liberals score less than 25 per cent, Liberal preferences could be decisive. ABC psephologist Antony Green has identified the Labor seats of Batman and Wills in Victoria and Grayndler in Sydney under the most pressure from a Greens/Liberal preference play.

Newspoll tracking of primary votes since 2010 shows the Greens national vote peaked at 16 per cent in 2010 and has fluctuated within a 10 to 14 per cent range ever since. On May 9 the Greens’ primary vote as measured by Newspoll stood at 11 per cent.

So far, that is not evidence of a duopoly-smashing momentum, even with the direst news from the carbon dioxide monitor at Cape Grim.