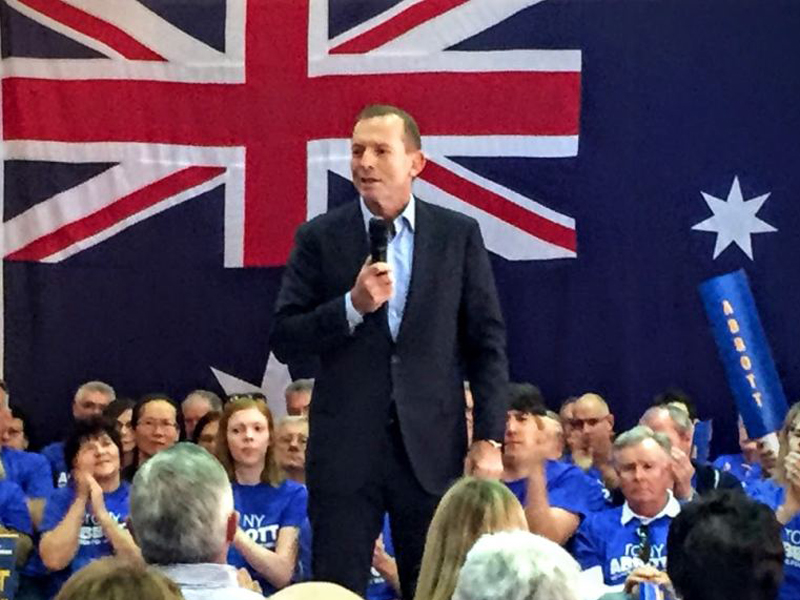 Former prime minister Tony Abbott has launched his campaign for re-election in his local seat with a rigorous defence of his time in office and a call to re-elect Malcolm Turnbull as PM.

Speaking at the Queenscliff Surf Life Saving Club, Mr Abbott told his supporters he wanted to continue working for the electorate and the policies that defined his government.

But there was little sign of acrimony between Mr Abbott and the man who replaced him as Prime Minister, with Mr Turnbull receiving six mentions in total.

“We scrapped the carbon tax, we scrapped the mining tax, they said you’d never be able to do it, but we did,” he said, before the backdrop of a large Australian flag.

To the cheers of faithful supporters, Mr Abbott defended his party’s economic record, its record on immigration and the fight against terrorism.

“We made a very strong start to the task of budget repair … we worked at home and abroad to keep this country safe in the face of challenges we have not seen for at least a generation,” he said.

And in a pitch to the voters of Warringah, Mr Abbott drew a line of continuity between his time in office and Mr Turnbull’s.

Mr Abbott has held the affluent seat of Warringah since 1994.

“I think all of us know what a special person he is,” he said.

“He is someone that understands his community and is prepared to give back,” he said.

“You knew what he believed in and he went out to fight for it.”

Mr Baird cited Mr Abbott’s achievement as health minister and reaching the “highest office in the land”, but spoke most vigorously when calling Mr Abbott “the most effective outstanding leader of the Opposition we have ever seen”.

Warringah is considered a very safe Liberal seat, and was taken by Mr Abbott with 60.8 per cent of the primary vote in 2013.

He will be facing Labor’s Andrew Woodward, who is a corporate climate change adviser, as well as candidates from the Greens, Christian Democrats, and the Nick Xenophon team.