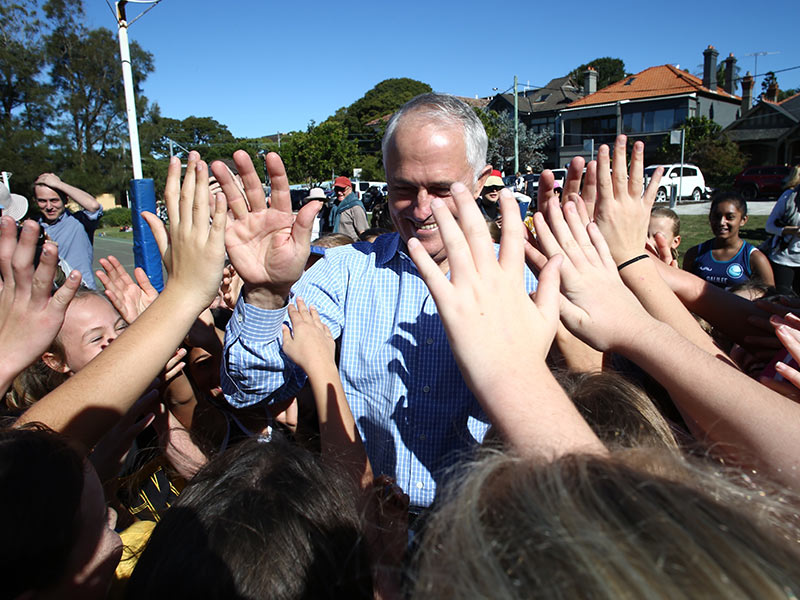 The government's Gonski 2.0 plan is the second overhaul of school funding in four years. Photo: AAP

Malcolm Turnbull’s personal wealth continues to haunt his election campaign but the coalition insists it should be a source of national pride.

“People identify with that, they’re proud of a prime minister who has made a success of his life,” Ms Bishop told reporters in Perth on Saturday.

He shouldn’t have to apologise for his success in the wake of ongoing “class warfare attacks from Labor”, she said.

Licking his wounds after a room of 100 undecided voters judged Opposition Leader Bill Shorten the winner of the first leaders’ debate on Friday night, Mr Turnbull took his election campaign to the marginal multicultural Sydney seat of Reid.

He fended off criticism that his enormous bank balance prevented him connecting with western Sydney voters following a week that saw him dubbed “Mr Harbourside Mansion”.

Australia is built on opportunity where everyone is entitled to aspire to achieve great things for their families, he said.

“Those of us who are fortunate to do so, should count our blessings and always recognise the importance of giving back to the community,” Mr Turnbull told reporters.

“Lucy and I have been very lucky in our lives. We know there are many people who have worked harder that have not been so fortunate.”

At a Brisbane education rally on Saturday, Mr Shorten appeared buoyed by his strong debate performance. It had been a great chance to engage voters and hear their issues, he said.

“What I think is telling last night is the Liberal Party is talking to itself and the Labor Party is listening to Australia.”

‘They must be remembered’

Also on Saturday, Mr Turnbull met the parent of a man who was killed in the MH17 air disaster.

Serge Oreshkin received the coroner’s report on the death of his 29-year-old son on Friday, but hasn’t been able to open it, he said.

Victor Oreshkin died when Malaysia Airlines flight MH17 was shot down over the Ukraine, Russia border in July 2014.

“It is too hard because I don’t know what I’ll read in there,” he reporters.

“I will open it, I will go through it but it’s not easy.”

He knows how his son died but he’s never seen his body.

“It doesn’t matter what pieces it was in, we’ve never seen it.”

Mr Oreshkin was in the Sydney suburb of Homebush on Saturday when Prime Minister Malcolm Turnbull met with locals as part of his federal election campaign.

He pleaded with the prime minister to make sure the families of the 38 Australians killed in the crash are remembered.

Mr Turnbull embraced the emotional father, later saying giving him a hug was the “best thing we can do”.

“You can only imagine the grief that Serge feels after losing his son Victor in that shocking murderous attack in the plane,” he said.

Mr Oreshkin admits his family isn’t coping and he can’t pretend that everything is OK.

He doesn’t want compensation and believes the government has done more than enough.

But he hopes there’ll be funding into the future to get the families together once every few years to handle their grief and sorrows.

“I just don’t want to be forgotten,” he said.

Be proud of PM’s wealth: Libs