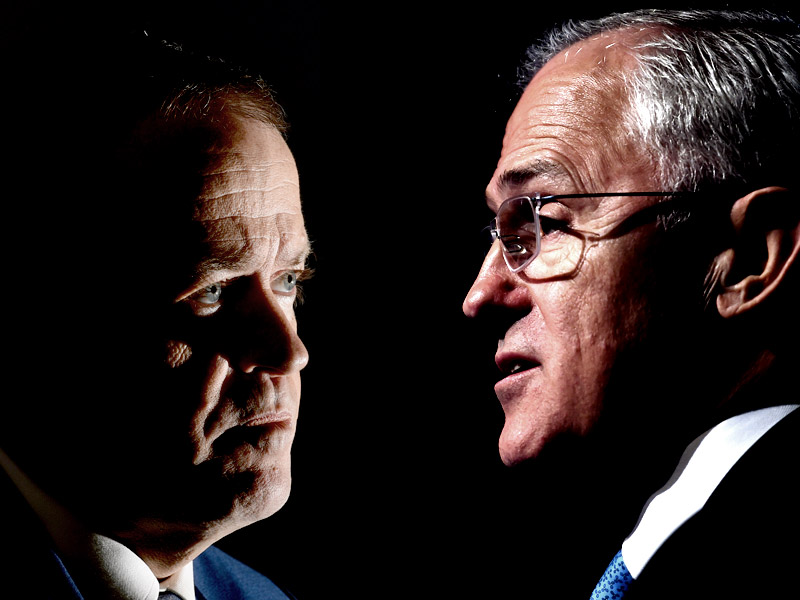 “Sure … the banks will change their practices … after a lecture from you”.

Mr Shorten responded with an attack on the banks, declaring he was unable to understand how they could charge fees for ATM access and such extortionate interest on credit cards.

Mr Turnbull foolishly had given Mr Shorten an opening when he reminded the 100 voters in the room – hand-picked by Galaxy Poll, hosted by Sky News and Sydney’s Daily Telegraph – that he had lectured the banks about their behaviour and given ASIC more powers – more than a royal commission – to regulate them.

His decision to point out that Mr Shorten spoke about the banks as criminals, saying he wanted to put banks “in the docks” as criminals, backfired spectacularly and attracted laughter from the audience.

For over an hour Mr Turnbull and Mr Shorten traded policy and priority differences on a number of issues based on 12 unfiltered questions from the audience.

An agile Mr Turnbull recovered somewhat on the banking question after Mr Shorten made a resentful aside about the Trade Union Royal Commission, at which he was called to give evidence. Mr Turnbull counter-punched hard.

The ‘lawless’ CFMEU and 100 of its officials faced 1000 misconduct charges, emphasising the need for the return of the Building and Construction Commission, the Prime Minister claimed. Mr Shorten let that one go through without rejoinder.

He made predictable strategic points about ‘jobs and growth’ being driven by the government’s plan for lower company tax to stimulate investment.

Repetition of the word ‘plan’ by both leaders tended to expose both to scepticism.

Mr Shorten unequivocally declared he would not privatise Australia Post or the Australian Submarine Corporation. Mr Turnbull seemed to despair that Australia Post was not profitable enough to be privatised. In any event, there was no Coalition intention to privatise in the next term.

Both leaders rejected a plea from one questioner to allow young people access to their super accounts to help buy a house. But this led to an already familiar exchange about Mr Shorten’s negative gearing reforms.

It would destroy investment, ‘jack up rents’ and undermine property values, the PM claimed.

Mr Shorten said each taxpayer was subsidising negative gearers at a cost of $310 per year and his reforms would not end negative gearing, only applying it in future to new housing.

Jeff Kennett, Joe Hockey and, until recently, Scott Morrison had indicated the generosity of the tax write off was unsustainable.

The real estate industry’s campaign against the Labor Party on negative gearing among marginal seat voters is now expected to intensify from the battlelines revealed in this exchange.

Mr Turnbull will need this third party intervention if he is to win the ‘aspirational’ vote over Mr Shorten’s appeal to fairness.

“We spend $10 billion on negative gearing … more than we spend on child care”.

On health, Mr Turnbull was diverted on discussion about the current GP payment freeze by announcing that Health Minister, Susan Ley, had just reached agreement with pathologists to continue to bulk bill.

And the winner is…

Mr Shorten won the debate overall by his moderate, friendly tone with a command of detail, only put off by his rote opening and closing statements.

The audience agreed. Forty-two picked Mr Shorten as the winner, 29 were more impressed by the PM and a further 29 were undecided.

Mr Turnbull was equally friendly but struggling to find his rhetorical feet on occasions, ended up looking like a salesman. Not, it must be said, a used car salesman, but a shiny new car salesman for a car we may all wish we could afford but doubt if we can.