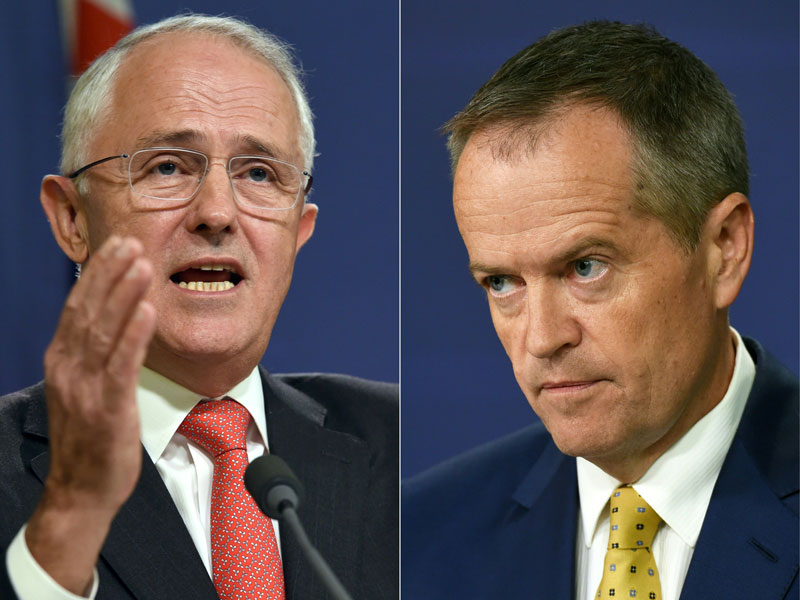 The prospect of a hung parliament dominated the second full day of election 2016 and both major parties were running away from the possibility at a million miles an hour, in part because it would mean going into coalition with the Greens.

Labor, still smarting from the ruinous deal it struck with minority players to retain power in 2010, strongly rejected the suggestion it would consider another marriage of convenience.

But there is matchmaking going on behind the scenes, evidenced by reports of Liberal-Greens preference deals in marginal seats to snooker Labor candidates in Victoria.

• Liberals won’t rule out preference deal with the Greens
• How Malcolm Turnbull plans to stay in power
• Turnbull’s ill-prepared leap into the unknown
• I’m not scared of Trump: Bishop

Out on the campaign trail, hip replacements made a surprise appearance on day two.

Malcolm Turnbull spent the second half of Tuesday at Holy Spirit Northside Private Hospital in Brisbane getting hands-on with an orthopaedic robot, which is expected to almost eliminate mistakes in joint replacement surgery.

The Prime Minister hammered in a fake hip replacement, but this was not a metaphor for the removal of Tony Abbott’s creaking government.

“Here we are, seeing the importance of innovation and its practical application,” he told reporters, relentlessly on message.

Then there was the matter of last week’s budget.

Recall for a moment the furore following the 2014 budget. Now consider this. New polling by Essential Research found that only 20 per cent of voters approved of the 2016 federal budget, compared with 30 per cent in 2014 and 34 per cent in 2015.

In essence, voters thought last week’s budget was worse than 2014, which was widely considered one of the worst budget in recent decades.

With no momentum from the budget, a defensive Turnbull government may have no alternative but to press the fear button. It can work a treat in times of negative perceptions.

Fear could become the theme of election 2016 from both sides of politics.

In spite of Australia’s AAA credit rating, unemployment at less than 6 per cent and good prospects for continuing prosperity through an increasing business engagement with our fellow Asians, Australia may have to choose its next government from two parties campaigning on fear.

Over the first two days of the campaign, the search for an election winning line of attack has been up in the political air.

Mr Turnbull started with a scare campaign over Labor’s proposed negative gearing reforms saying it would stop investment “dead in its tracks”.

Bill Shorten’s main scare campaign centres on fear of appalling banking behaviour with ASIC exposed as a weak consumer protector as some families are hung out to dry by their banks. Even though the prudential stability of Australia’s banks has given us financial certainty beyond the GFC, Mr Shorten may be on a winner with this one, his proposal for a royal commission forcing the government to boost ASIC’s resources.

At the National Press Club on Tuesday, Shadow Treasurer Chris Bowen told The New Daily columnist Paul Bongiorno that his moral compass was clear: “Stop the boats” was justified by the over-riding imperative to stop drownings at sea.

But fear is not powerful enough, it seems, to confront the grave danger reported by marine and climate scientists, and Sir David Attenborough, to one of the world’s natural wonders, the Great Barrier Reef.

It’s still early in the campaign, but neither major party has engaged this fear directly to build support for urgent and radical change to decarbonising energy generation.

Fear of higher electricity prices on our cost of living has gazumped fear about the fate of the reef from warming ocean temperatures produced through climate change.

If the action on day 2 of the campaign is any guide, election 2016 risks turning into a bonfire of all our fears.

Quentin Dempster is political editor of The New Daily.

Fear factor firming as the strategy of choice for leaders